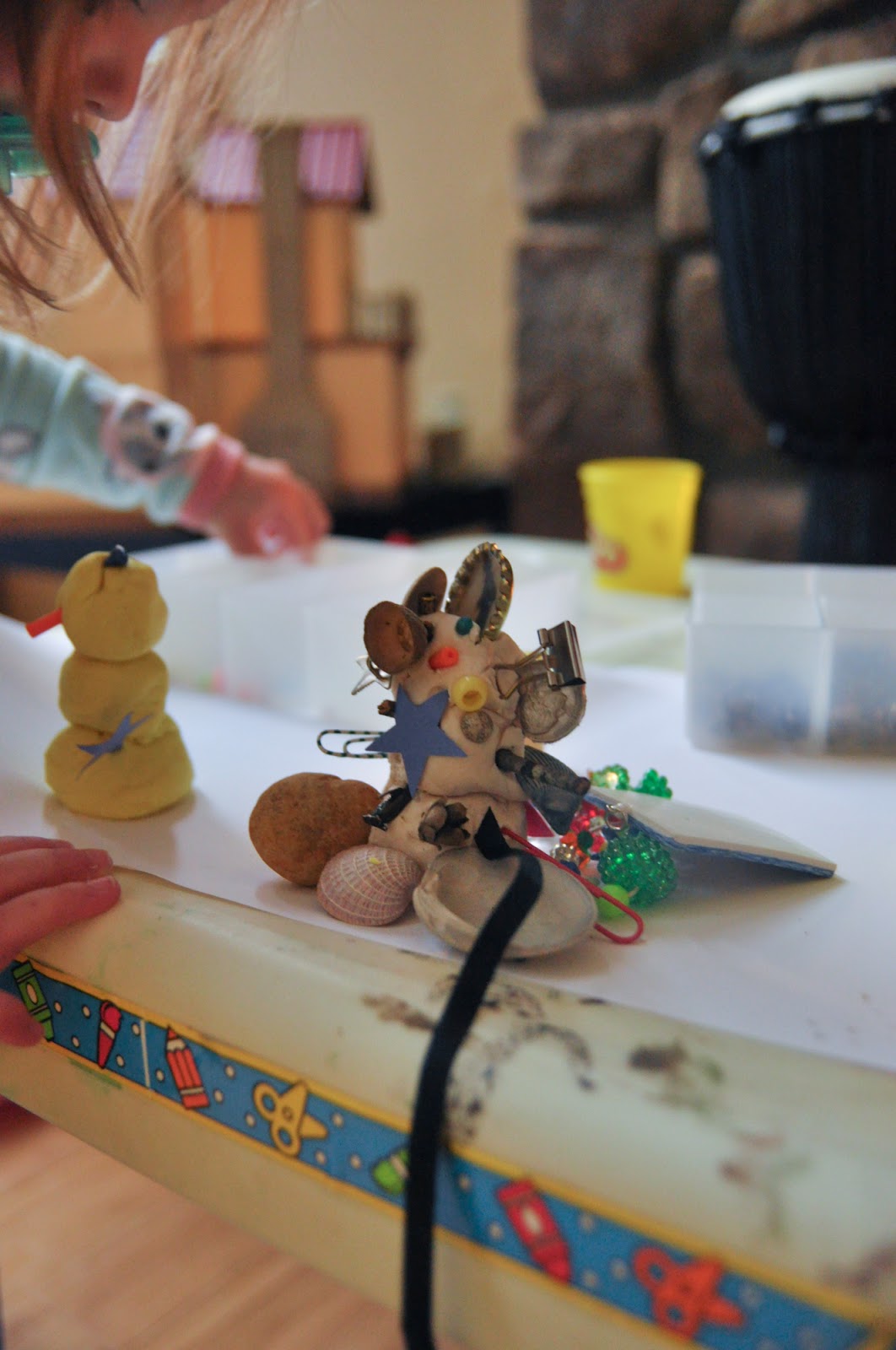 We've had a lot going on around the house and so I have lots to blog about but to start I wanted to talk a little bit about Echo and her current projects.One of my new years resolutions was to start journaling about her interests and coming up with ideas on how we can expand on them.  My journal pages look something like this.

and so and so on. I list an interest first and then list ideas of projects we can do involving her interests. Well one of her interests lately is snow/winter. We have a book she got for Christmas about seasons in a town (In the Town All Year Round. It's truly fantastic!) and she is really interested in the winter season and winter activities such as snowball fights, sledding and building snowmen.

Unfortunately we have had a pretty warm winter so there is no snow to play in. I came up with the idea to make snowmen out of play dough and decorate them as an alternative though and it has turned out great!
She also got a massive play dough stash for Christmas so we have been making tiny snowmen and then decorating them with beads, paperclips, sticks, seashells, and other small items. It is a really great hands on activity and keeps her occupied for a good long while. 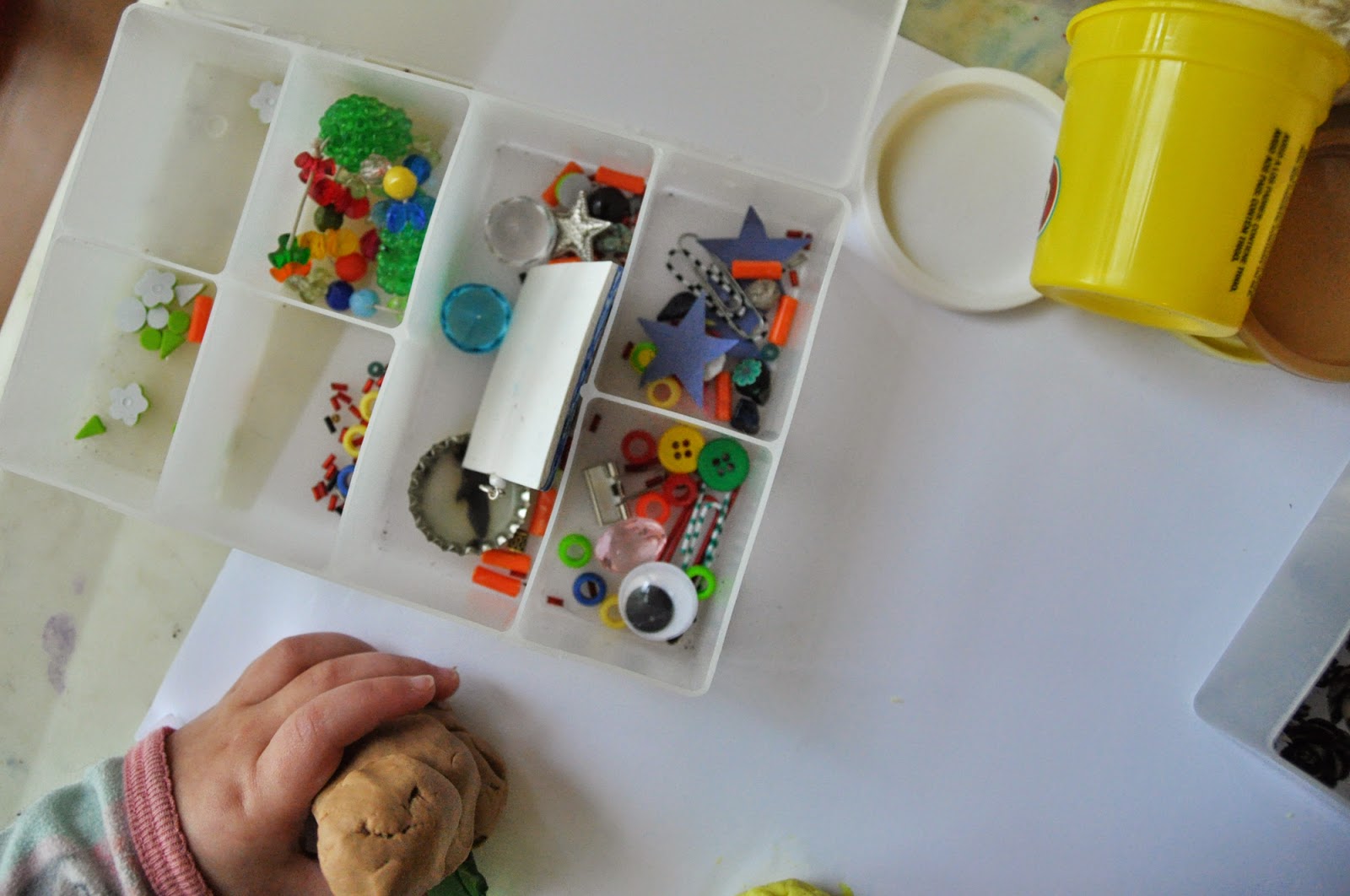 It's been really wonderful to see her unschooling in action. We follow her interests and let her set her own pace. We are starting to be amazed at the things she picks up without any formal instruction. She knows all the primary and secondary colors, can count to 10 and is beginning to express an interest in learning to write. We are having so much fun being her mentors on this unschooling journey.
Posted by Audreylaine510 at 5:59 PM No comments:

Getting the House in Gear 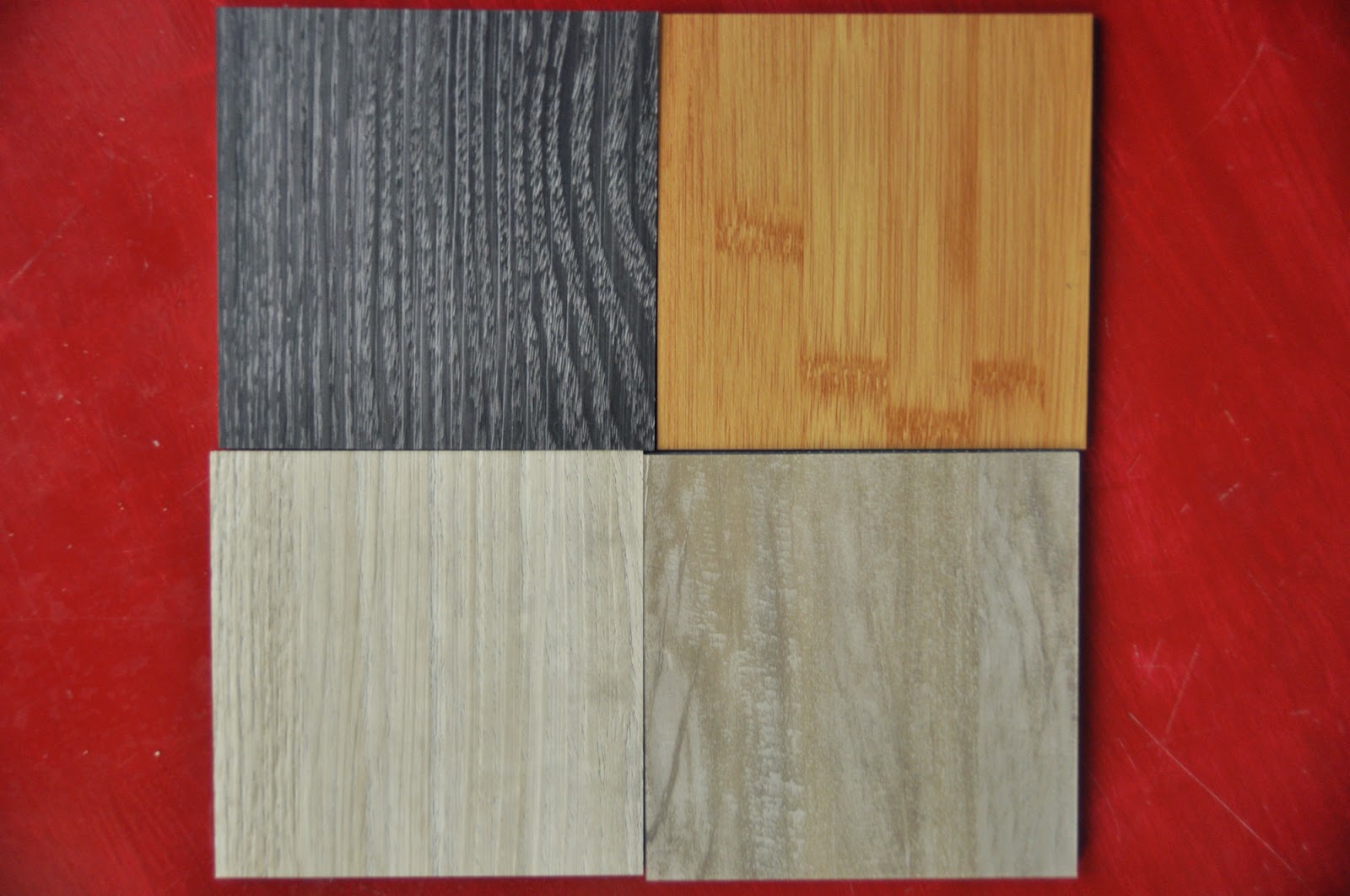 After we had kids our work on the house stagnated quite a bit. It's so hard to find time and energy to do the updates we want to do when we have two little ones that need our constant attention. Well this year we are buckling down and committing to getting some stuff done around here. Some of it we will be doing ourselves and some of it we will bite the bullet and just hire someone to do.

The first step was getting a garage door opener for my side of the garage (a big thanks to my in-laws for giving me this for Christmas!). Neither of us used to park in the garage and Eric still doesn't but after I got my shiny new car I didn't want to park it in the driveway under all those trees any more. Having to get in and out of the car to open the door was a pain though, especially with two kids. Having a garage door opener installed is such a little thing but will make a huge difference in my everyday life.

Our next step will probably be to work on finishing up our kitchen renovation which has been limping along for years. We are looking at new flooring (see flooring samples in the photo above) and finishing the paint and updated hardware on the upper cabinets. After that we will think about redoing the back splash.

We also have a million other things on our list to tackle this year but I think we are making good first steps. It's exciting to have house renovations to look forward to and I can't wait to get some of things done that I have been wanting to do for years. So be on the look out for big changes in our house this year, all to be documented here on the blog.
Posted by Audreylaine510 at 7:43 AM No comments: 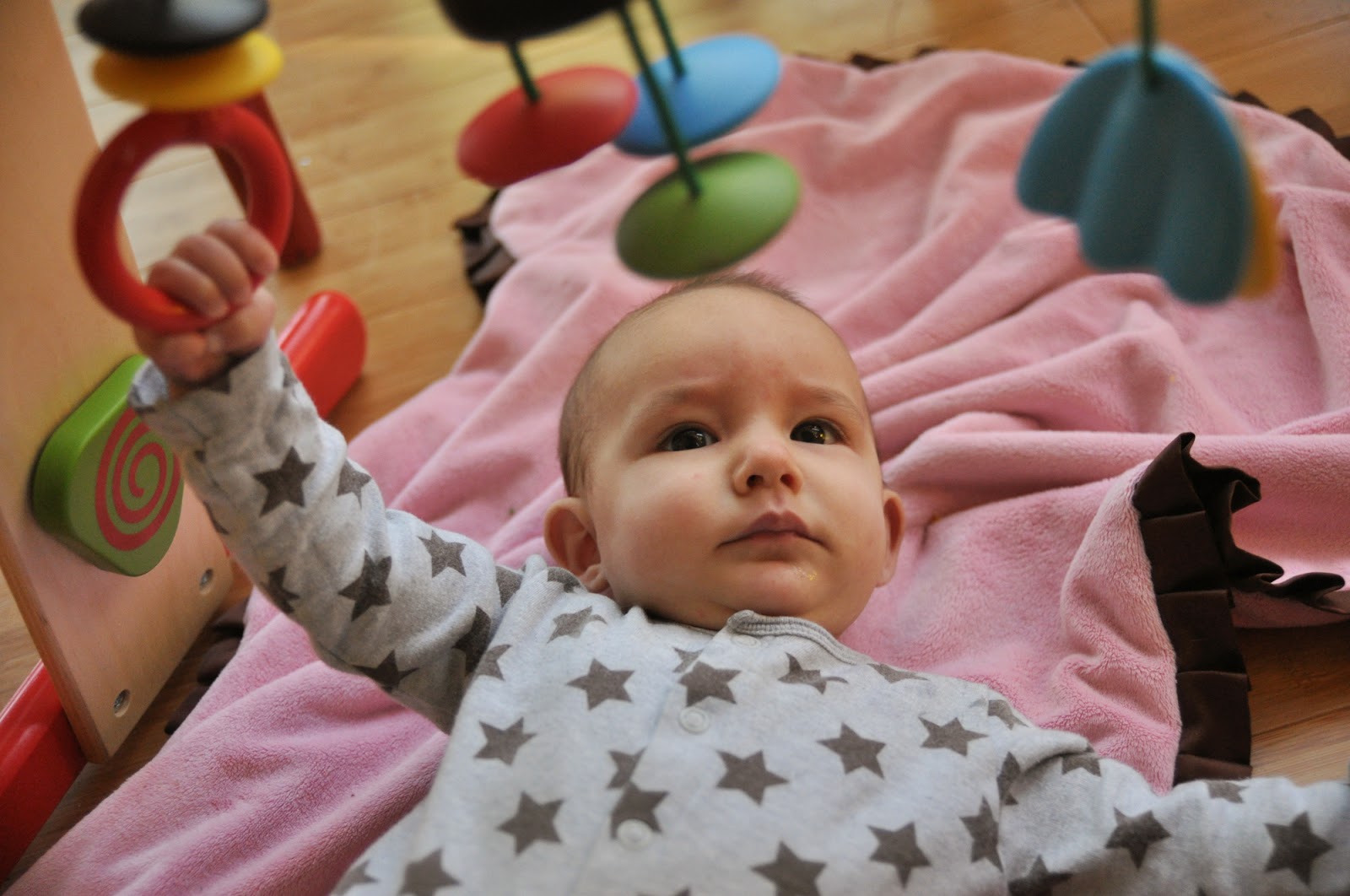 I feel like with the coming of the new year the kids have had some kind of transformation. Both of them seem to have had a huge developmental jump just in the last few weeks.  With Clover it has been mostly fine motor skills and hand eye coordination. Just last week she started intentionally grabbing for things and she is getting pretty good at it! She also recently discovered her feet which she finds fascinating. Besides all that she has suddenly become much more aware of her surroundings. She interacts with us more, she plays and giggles with us. It's like some magical switch has been flipped. 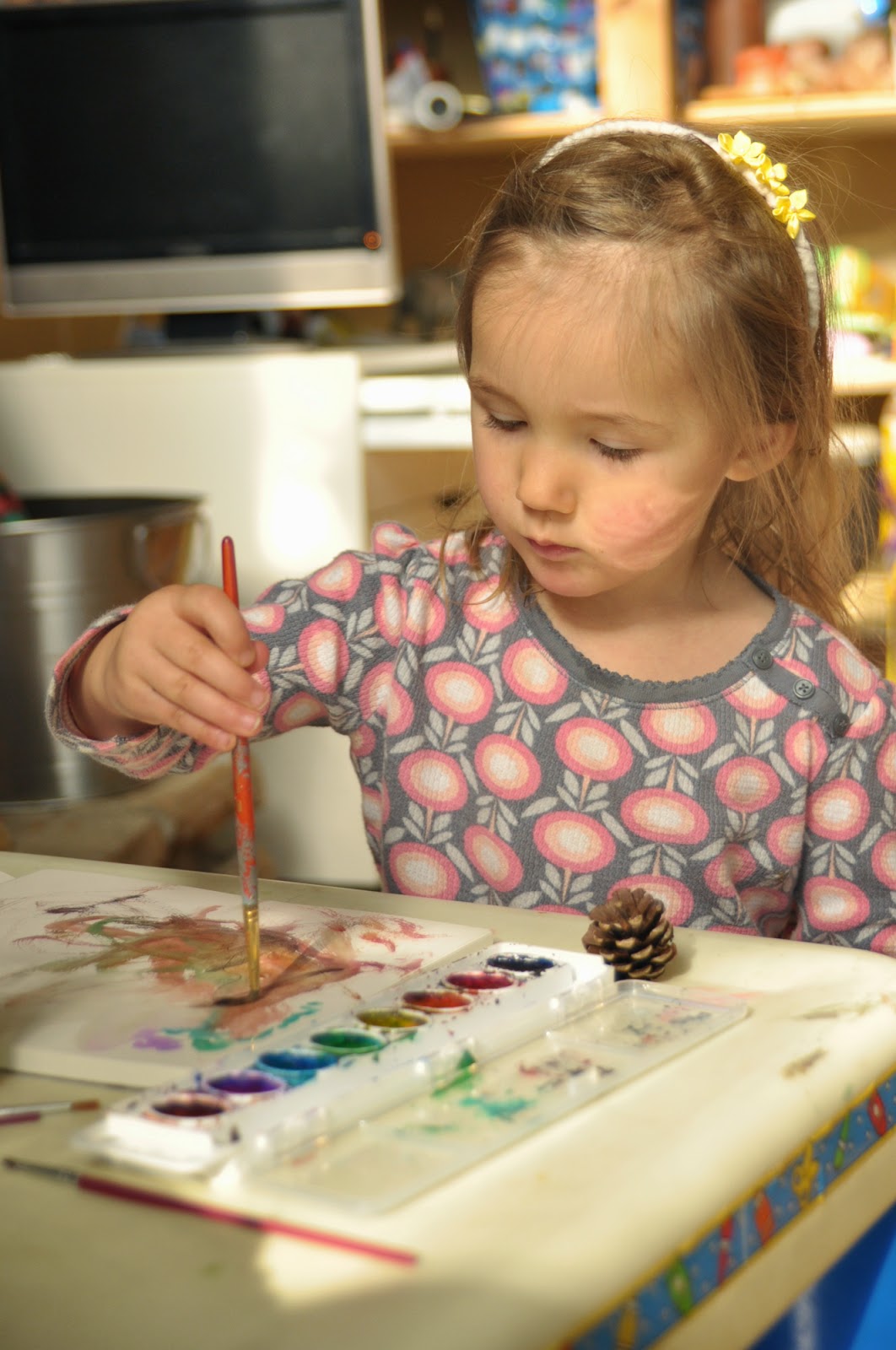 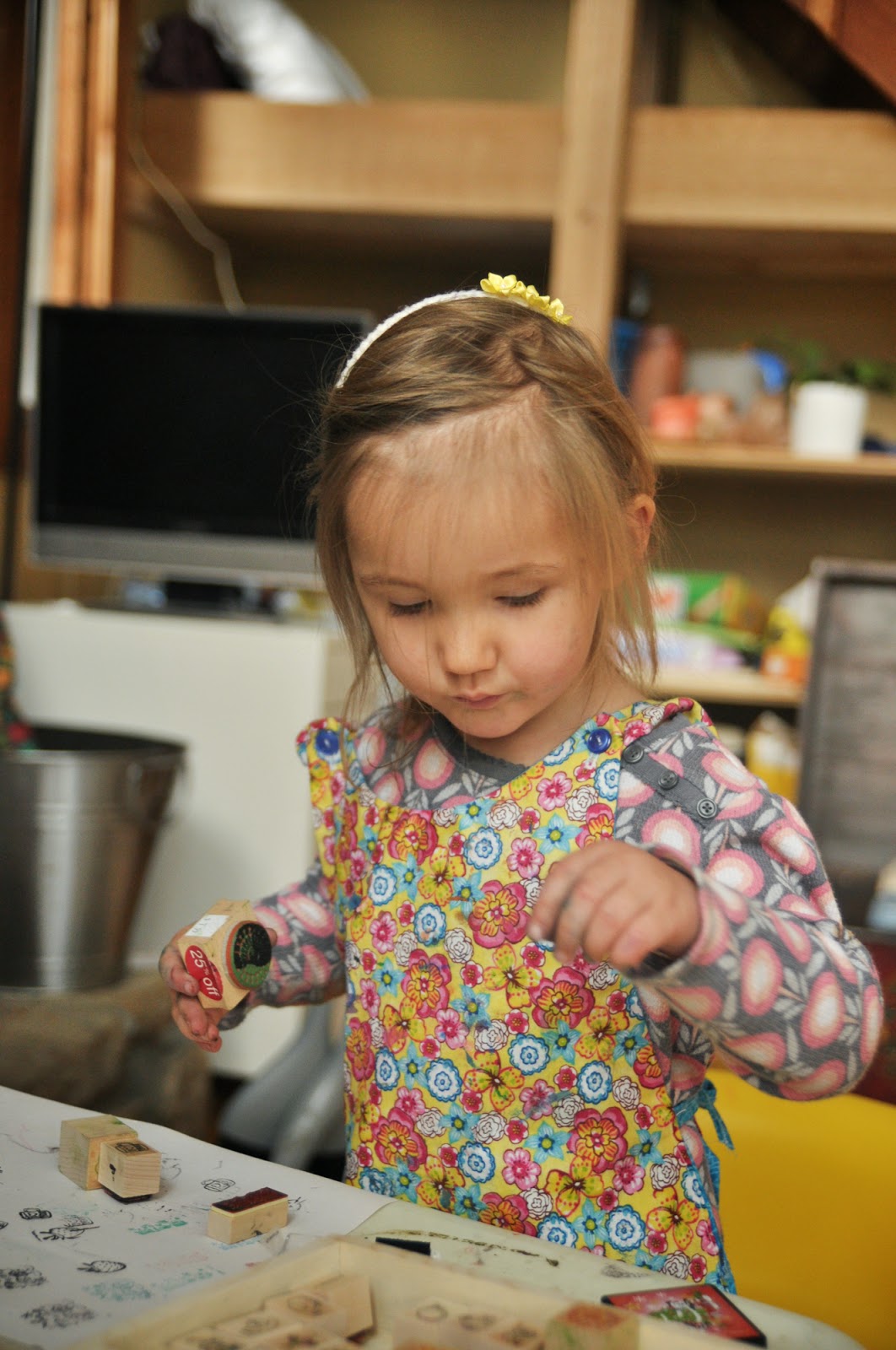 Echo has also been maturing greatly over the past few weeks. She is stringing together some pretty complex sentences these days. For example, "I want to take a toy from Baba's house back to my own home" and " I went to Target and got a coke and popcorn, that was fun".

She has also been showing a huge interest in fantasy and imaginative play. She informed Eric and I that she was getting married the other day. We were, needless to say, a little taken aback. We asked her who she was marrying and she said "mommy" so it's all good though :-) Apparently getting married in her mind means putting on a dress and dancing. Unfortunately I think that's all a lot of people care about when they get married but at this age it's pretty darn cute. I've "gotten married with her multiple times a week and I help her make elaborate dresses out of blankets and then we dance around the kitchen, pretty sweet if you ask me :-)

She also spends a lot of time "hiding from giants" which consists of the whole family hiding under a blanket until she tells us the giant is gone. After we poke our heads out she inevitably says "another giant's coming!" and we have to hide a again.  This kind of thing is a bit of a shift from the way she used to play pretend where she would mimic doing real things like cooking and cleaning. She still does these things too but the more fantastical play is fascinating to me, not to mention fun!

I'm also happy to report that after months of Echo showing no interest in doing art with me she has begun to explore different artistic mediums again. She loved painting when she was younger but around the time she turned two her interest waned and she pretty much stopped wanting to do any kind of art at all. To my credit I didn't force the issue even though I had always pictured spending hours upon hours painting and coloring with my daughter. I left the art supplies in an area she could access them but I pretty much stopped suggesting it as an activity since she didn't seem interested.

Just the other day she came to me with watercolors and paint brushes in hand and told me she wanted to paint. She then spent the next hour and a half painting peacefully at her little art table. It was amazing! When she finished that she wanted to use her new rubber stamps that she got for Christmas so she spent a good 45 minutes on that as well. Pretty cool! I don't know if her renewed interest in art will continue but I am happy to see her exploring different things and I am really impressed with her attention span. I've included some pictures of her work below. 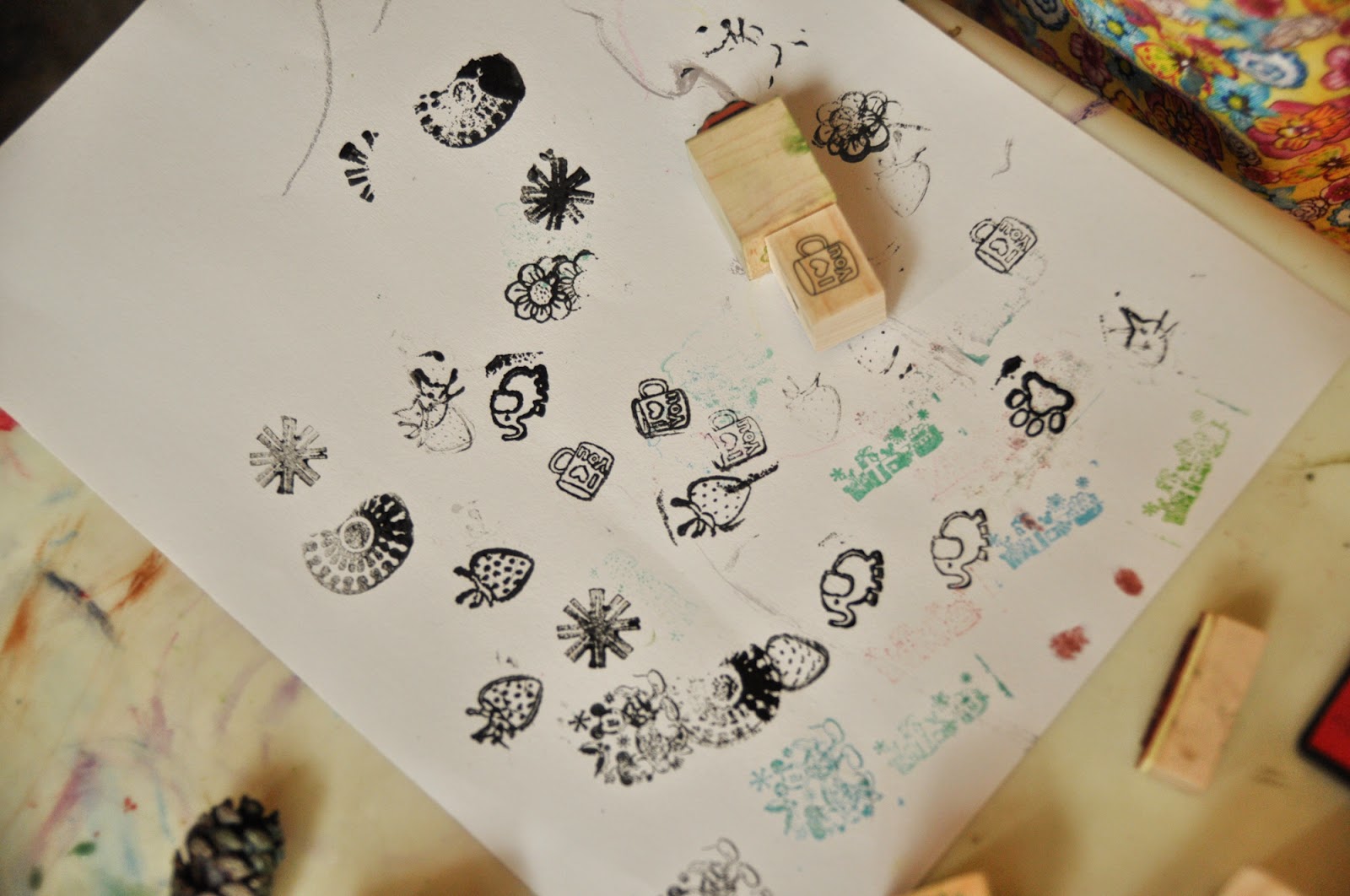 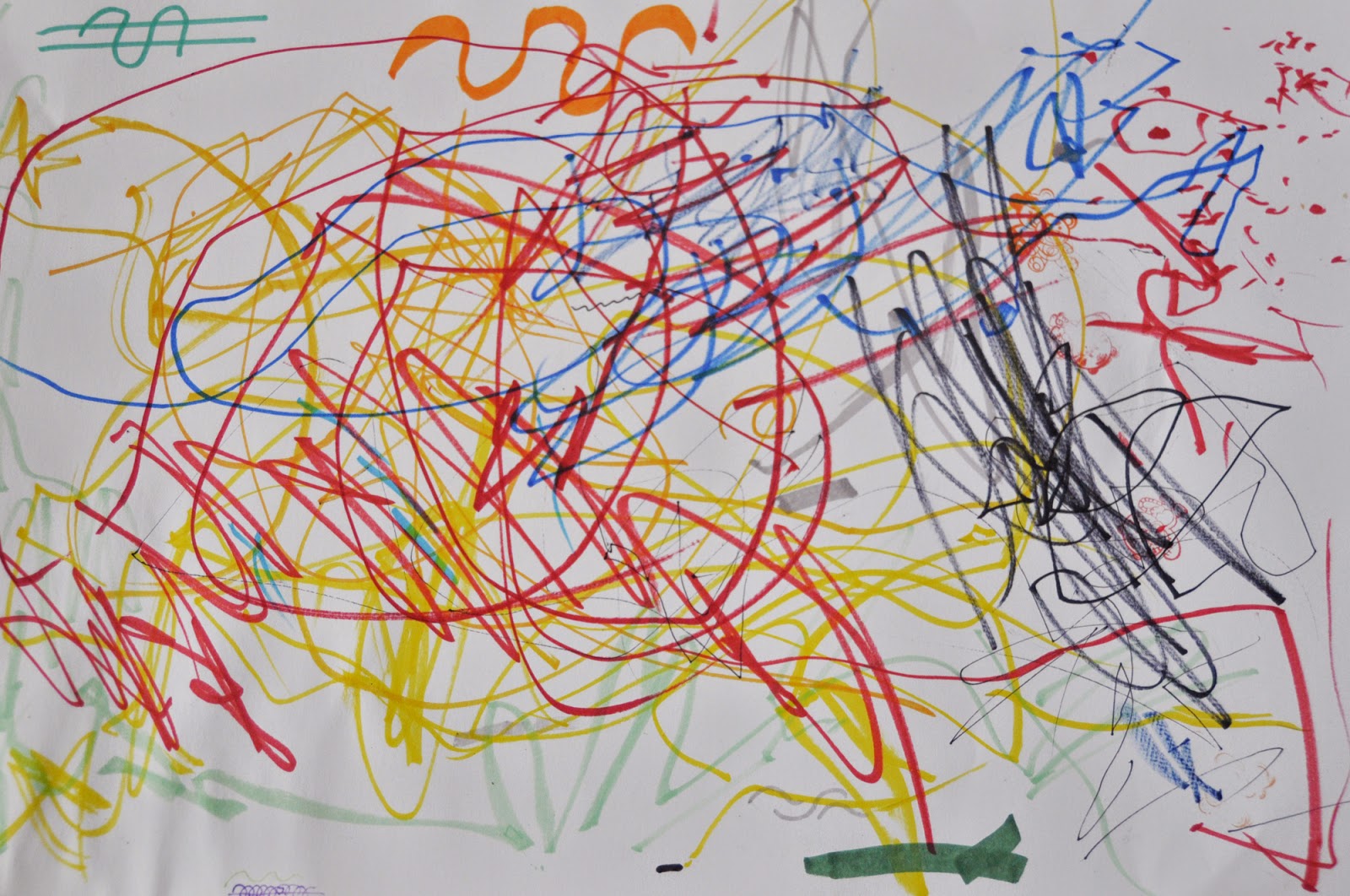 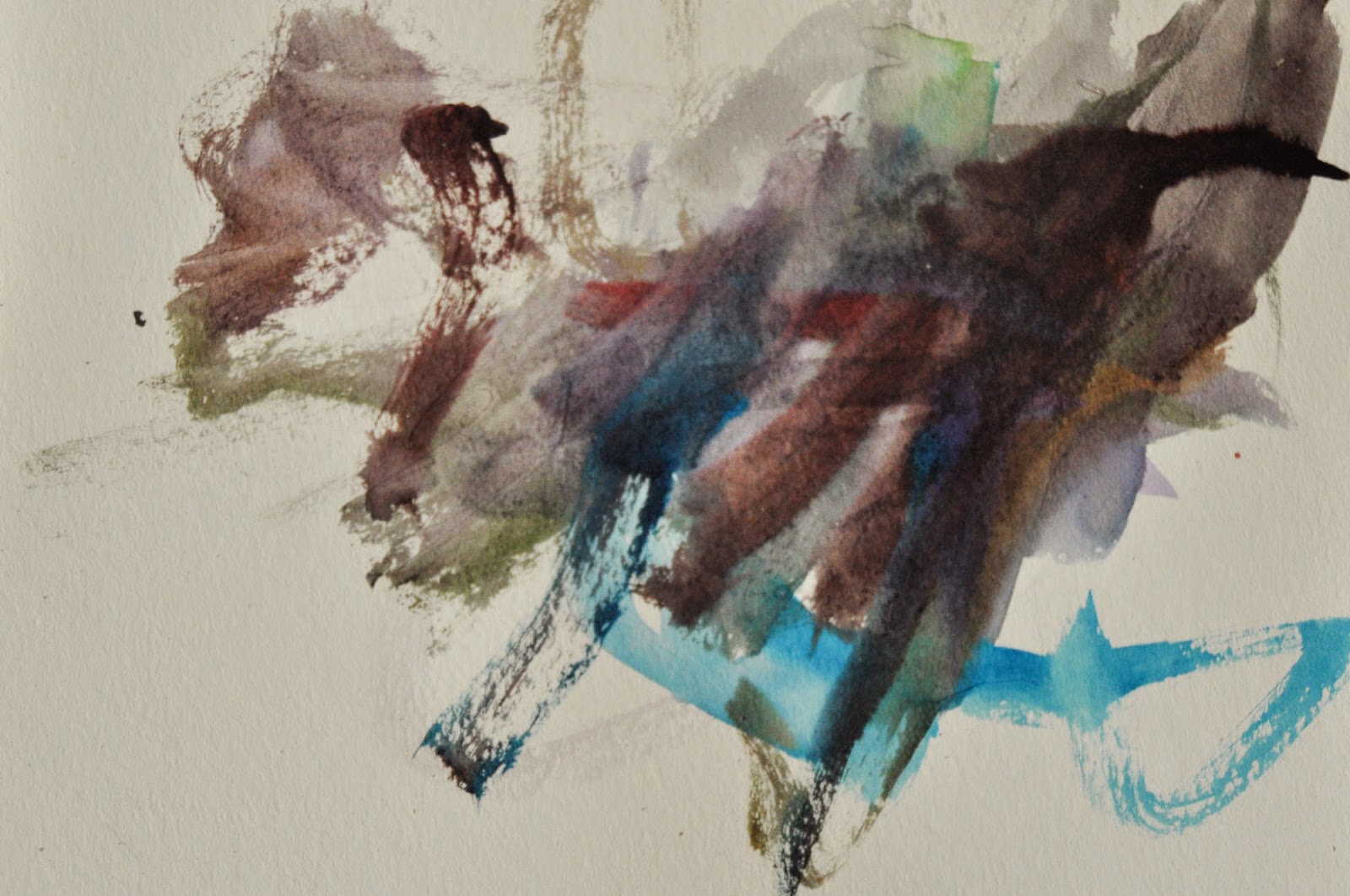 I feel like I am really entering a golden era with the kids. The terrible twos are already starting to ease up a bit with Echo and she is getting to be so much fun to talk to and play with. Clover is reaching an age where she can really interact with us and is coming close to being able to sit up which will make her much more self sufficient. These two girls fill my life with so much love and purpose, I am so lucky to be their mommy.

We had a crazy busy December with lots of visitors and holiday activities. Here is a little bit of what we had going on, as always you can see more on my shutterfly account. 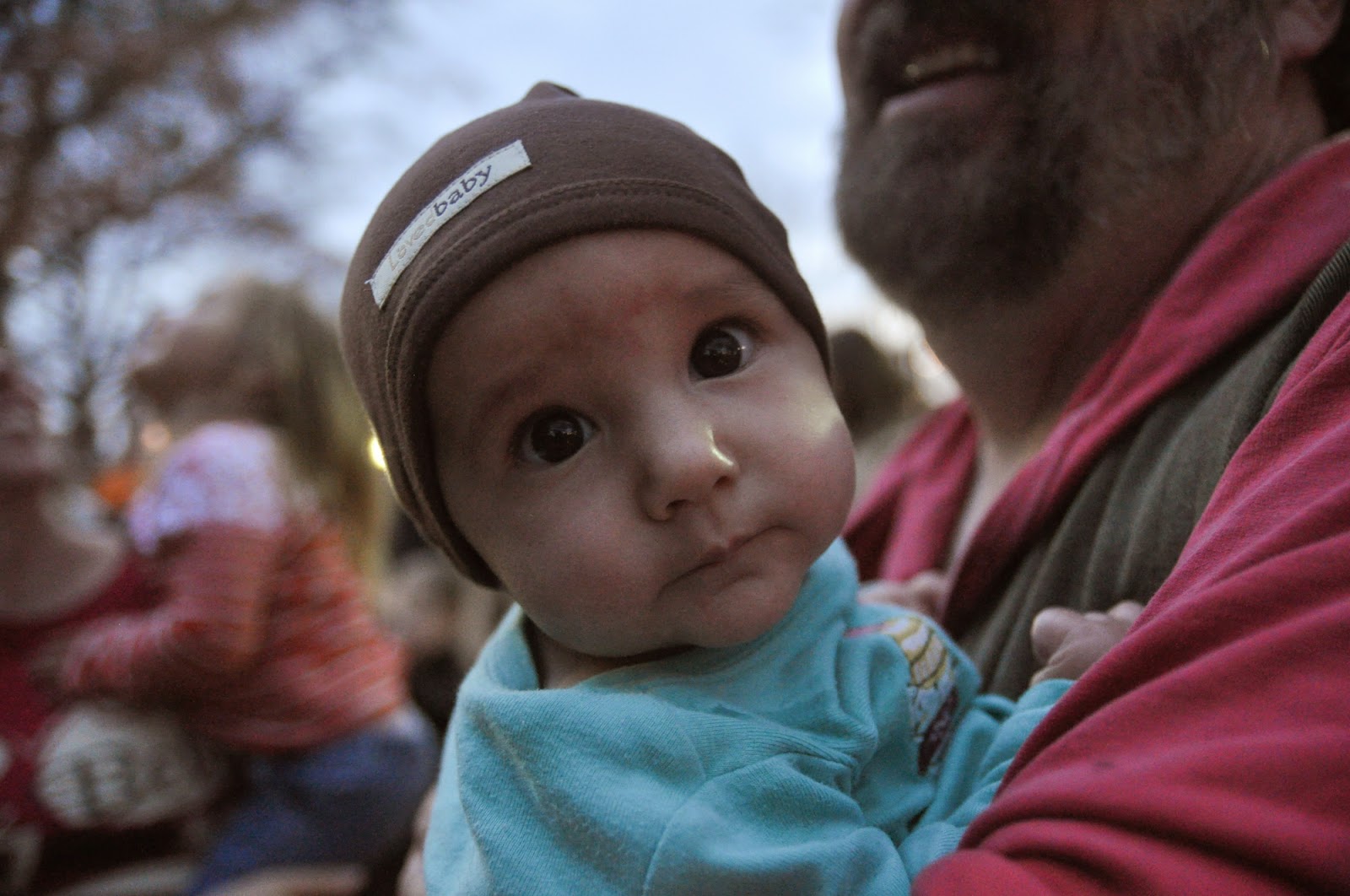 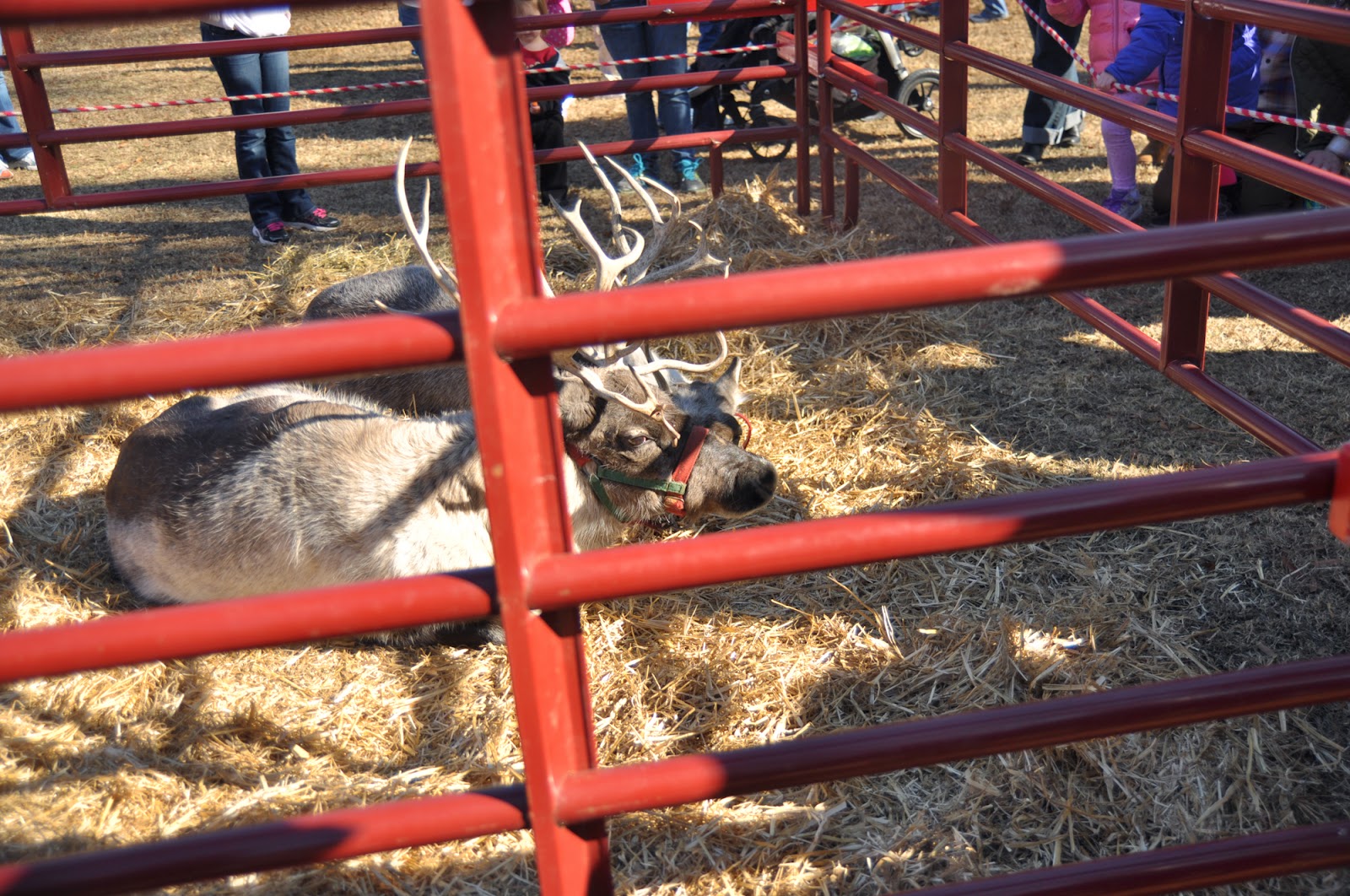 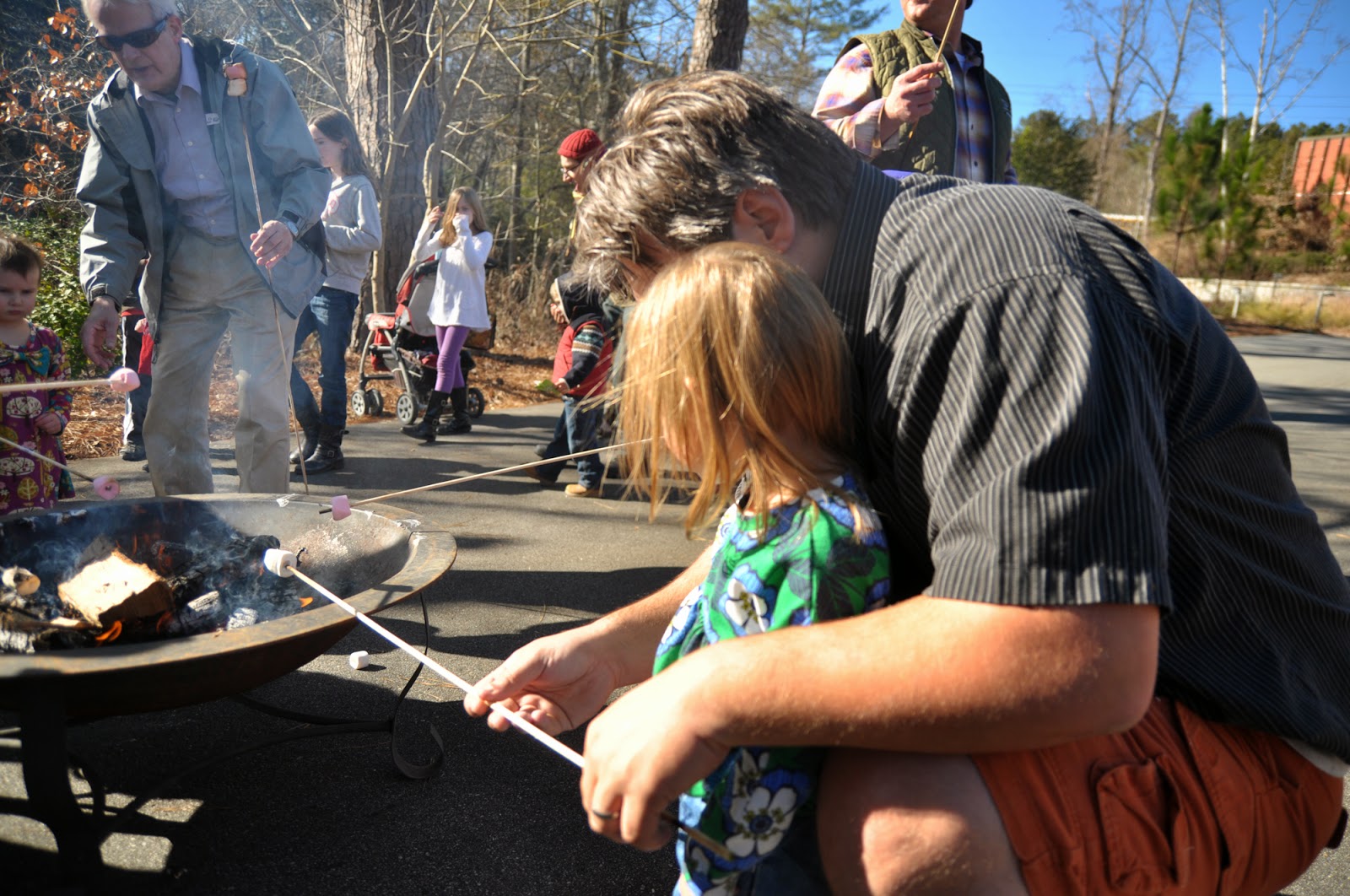 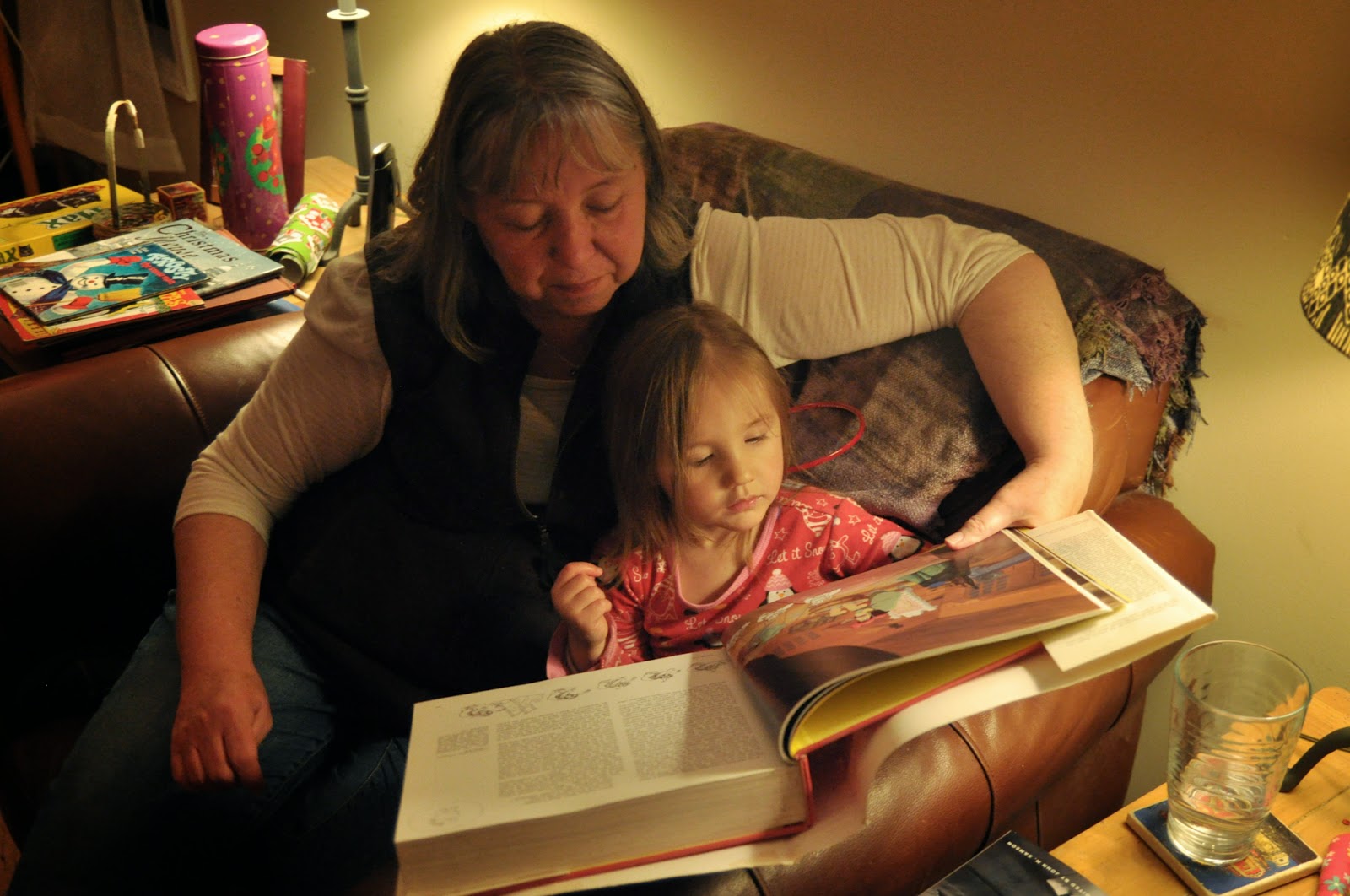 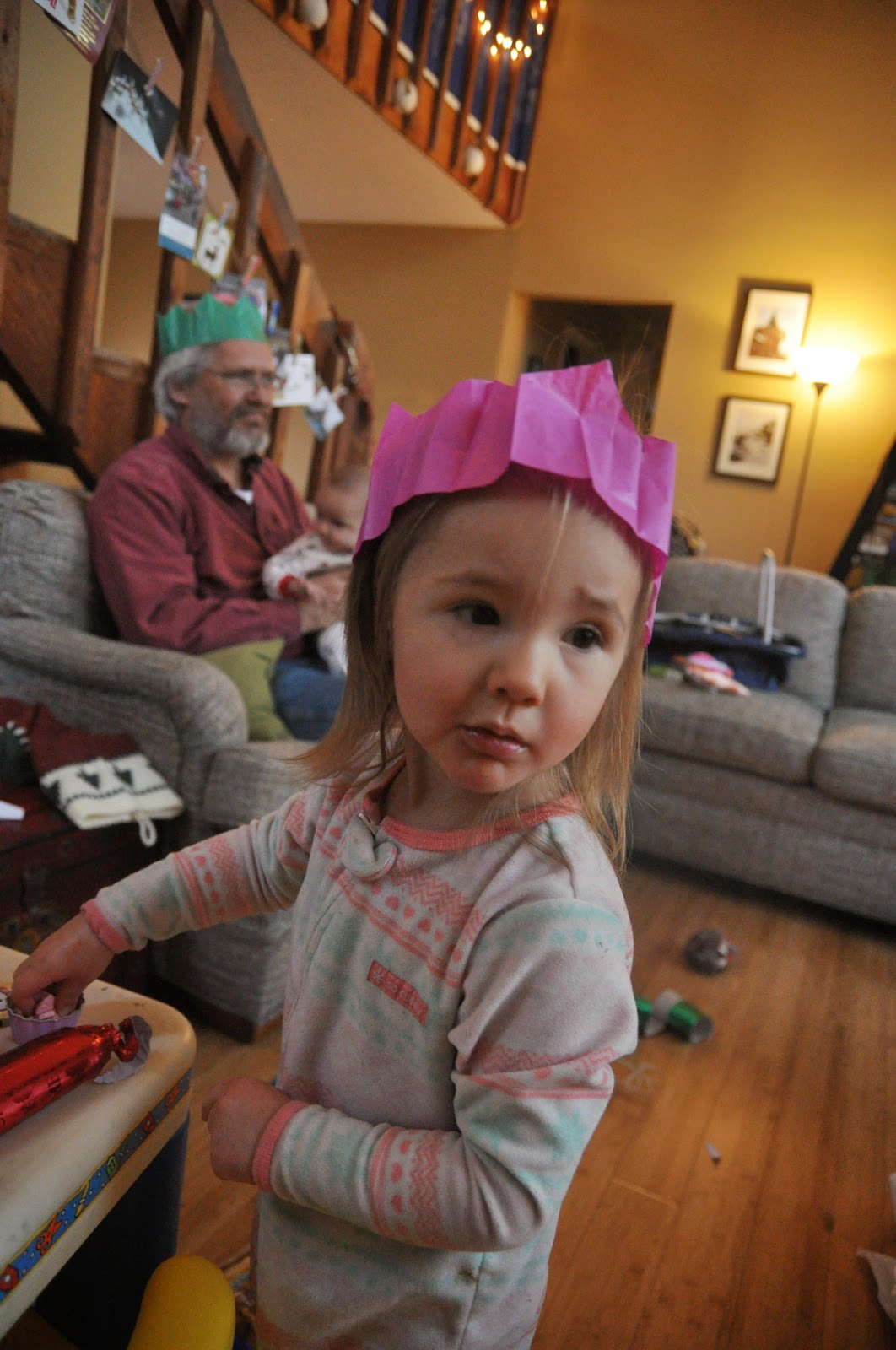 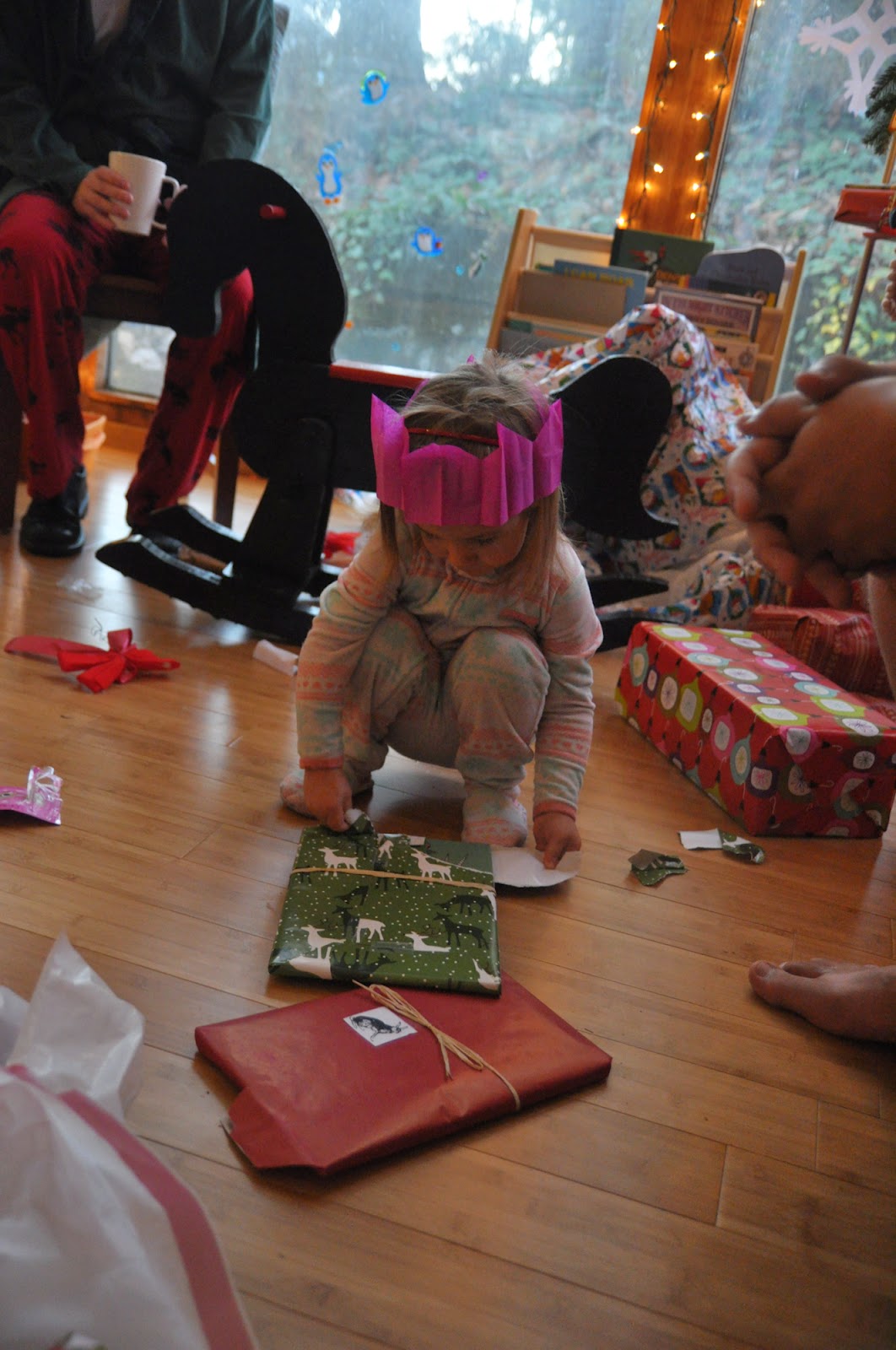 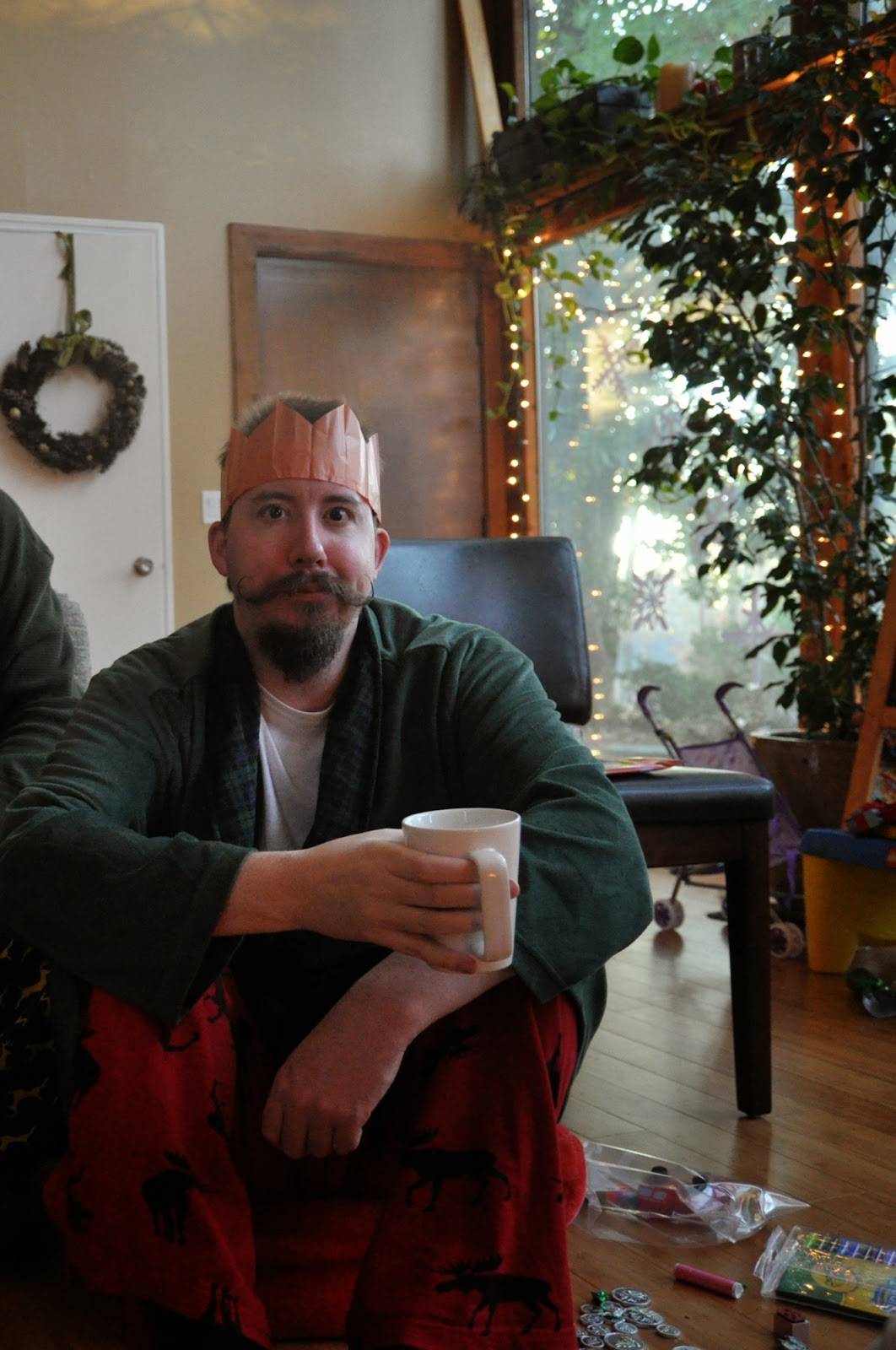 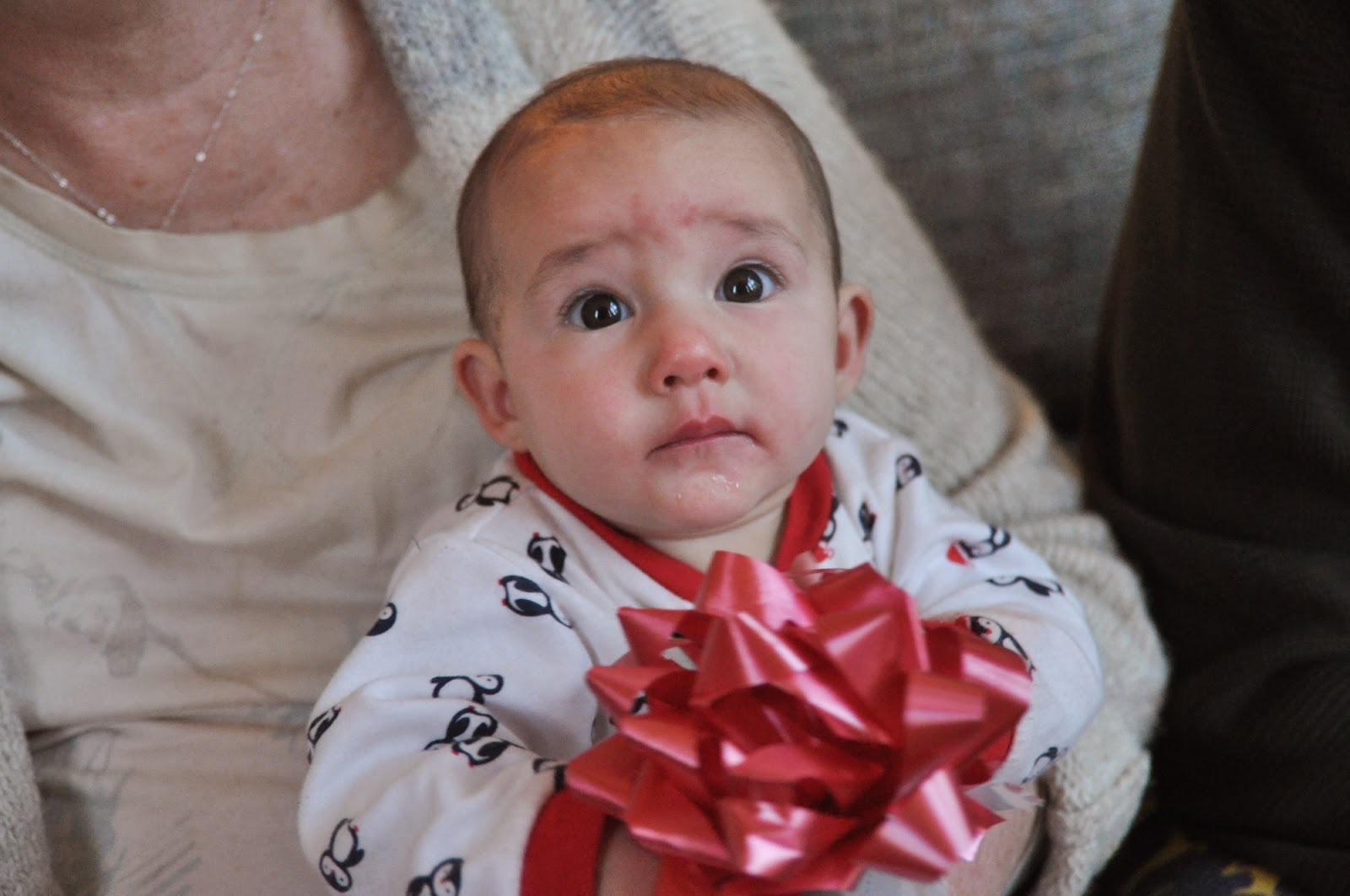 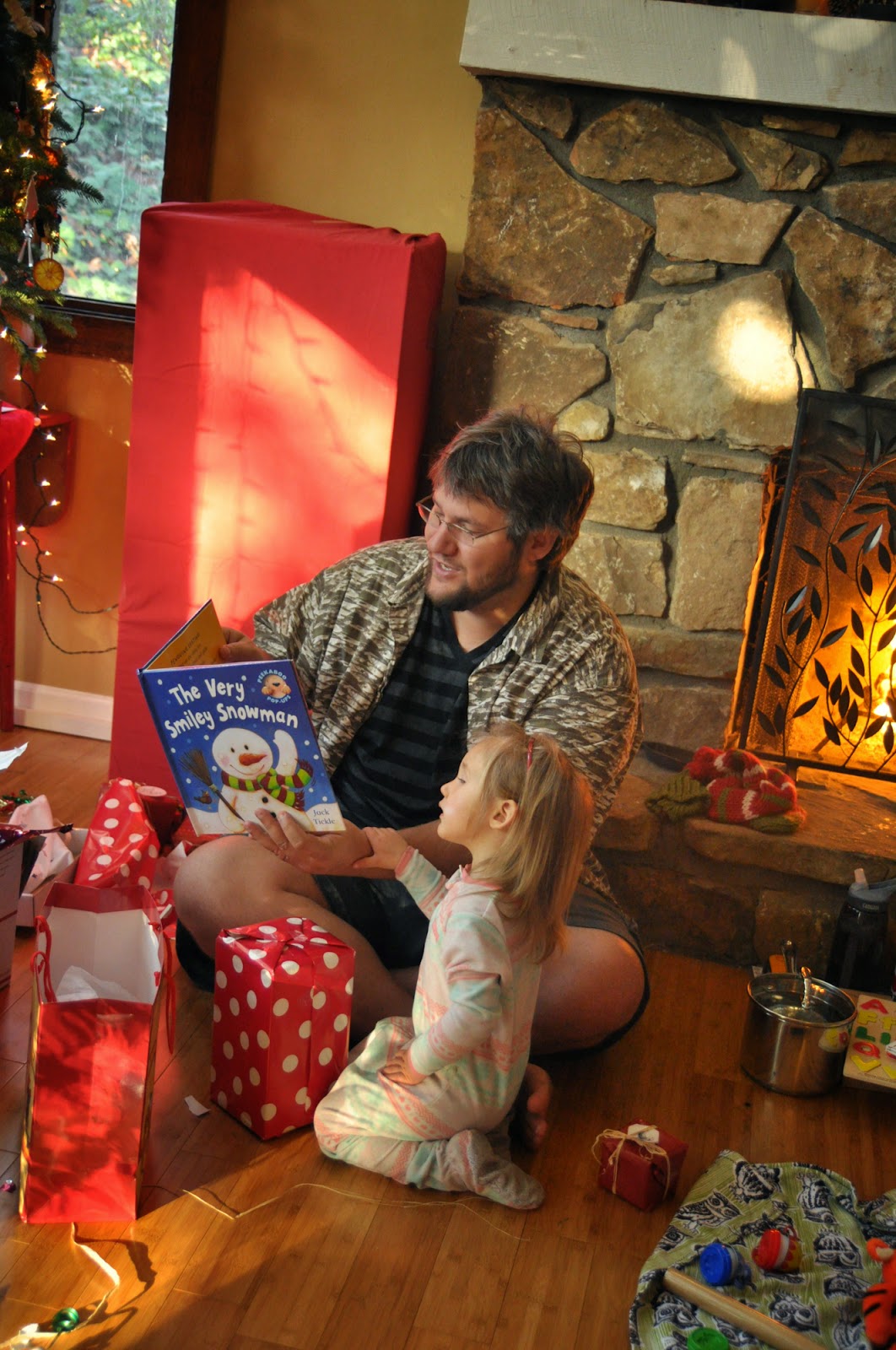 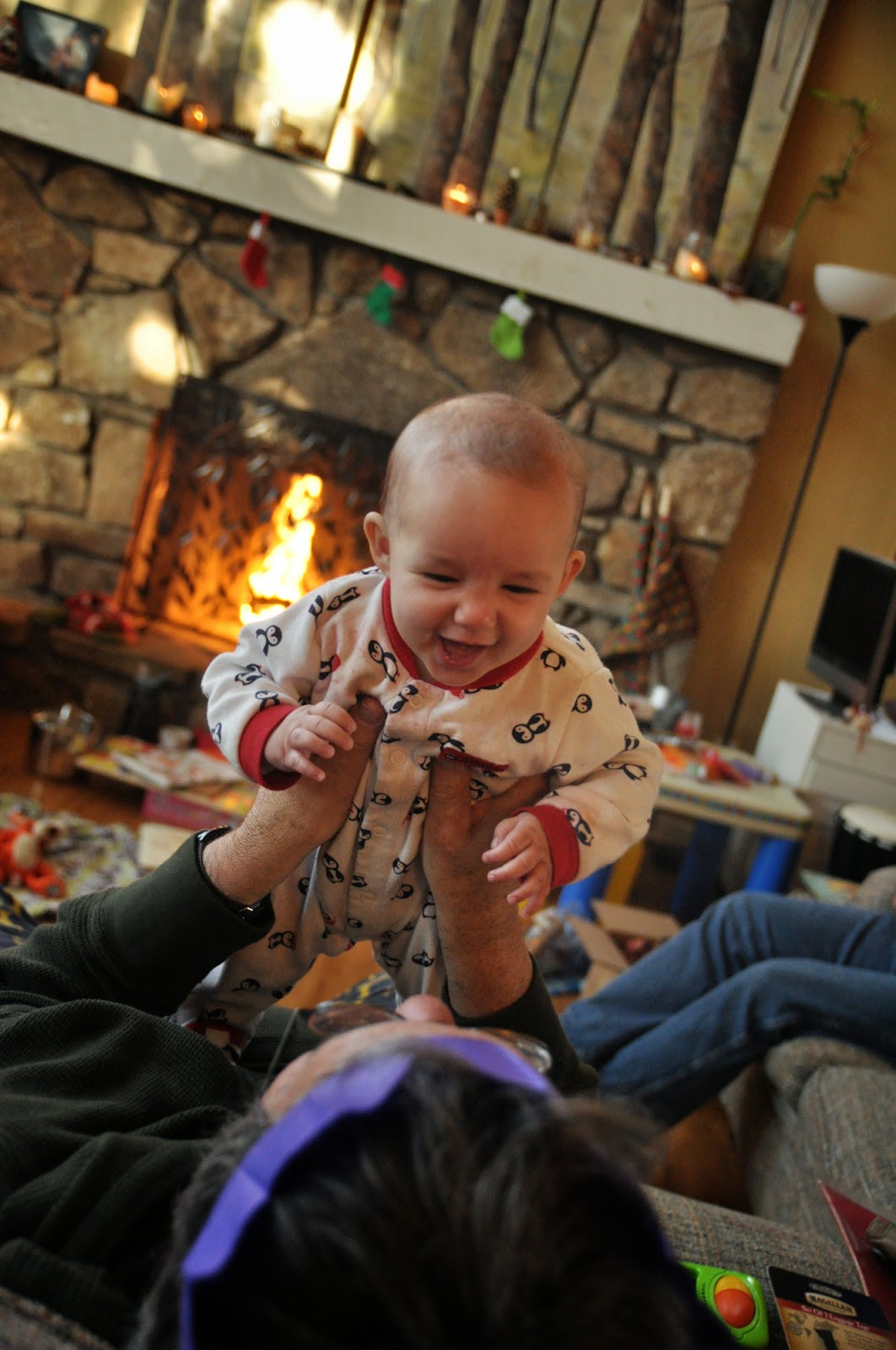 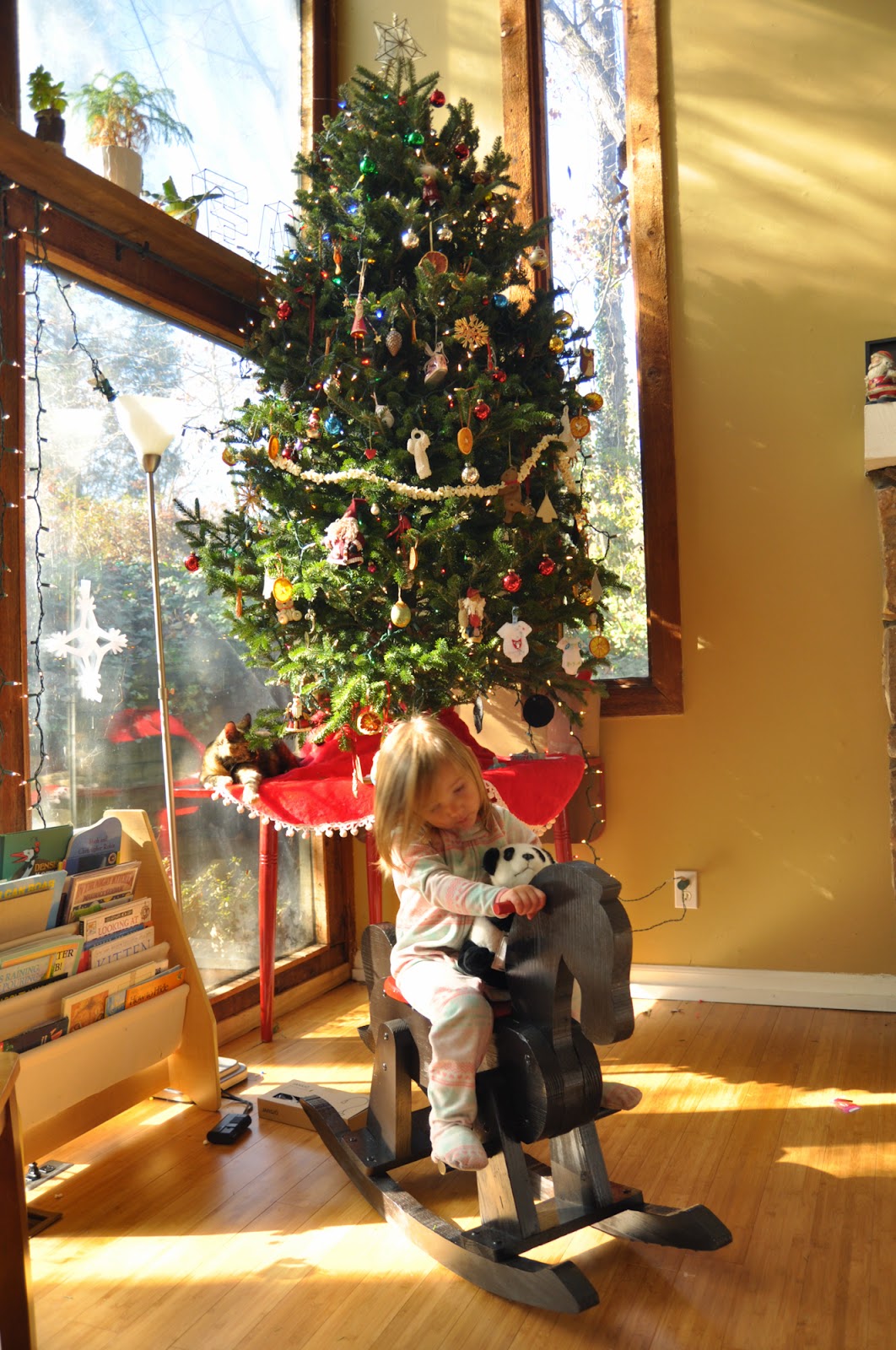 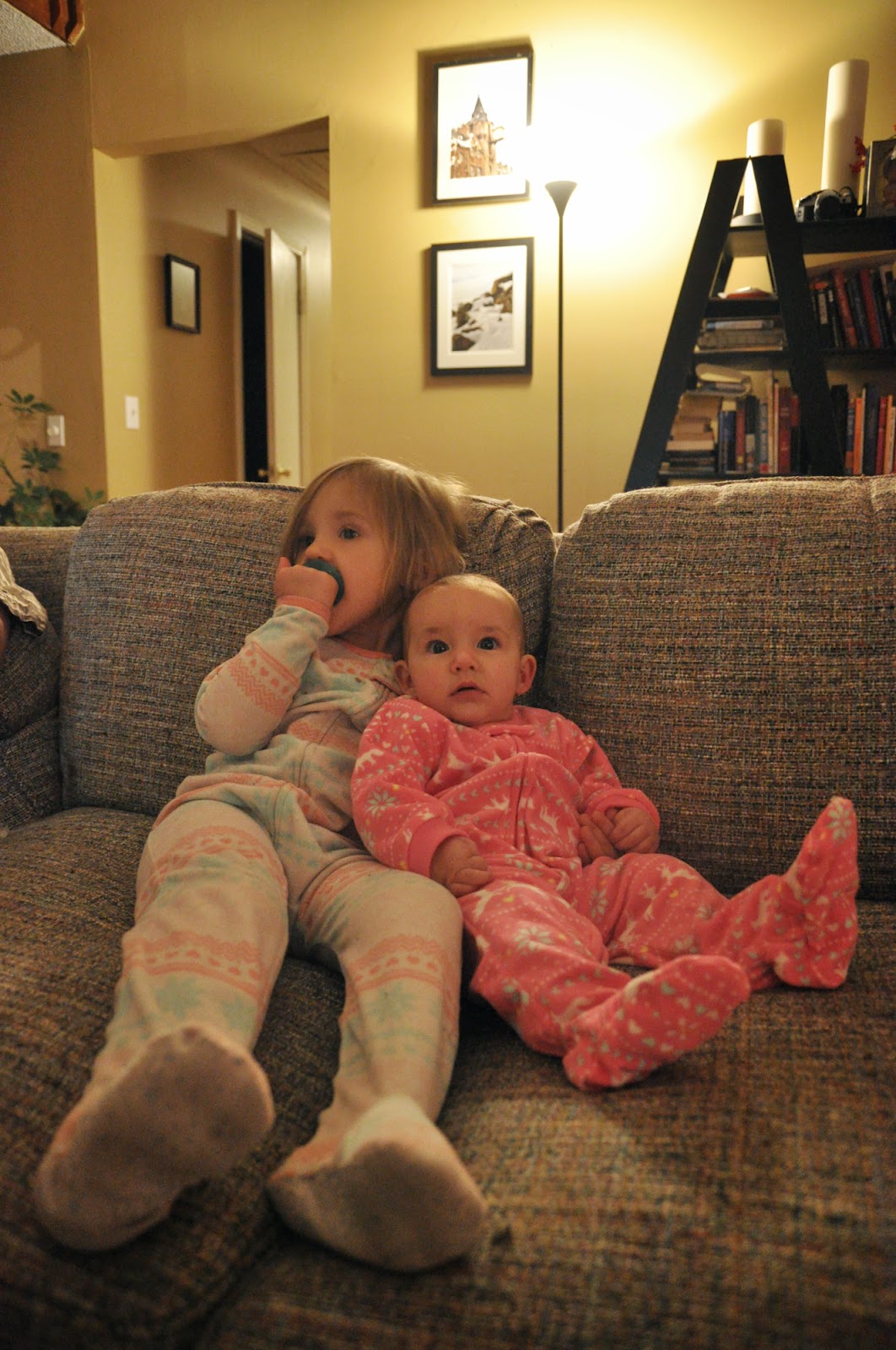 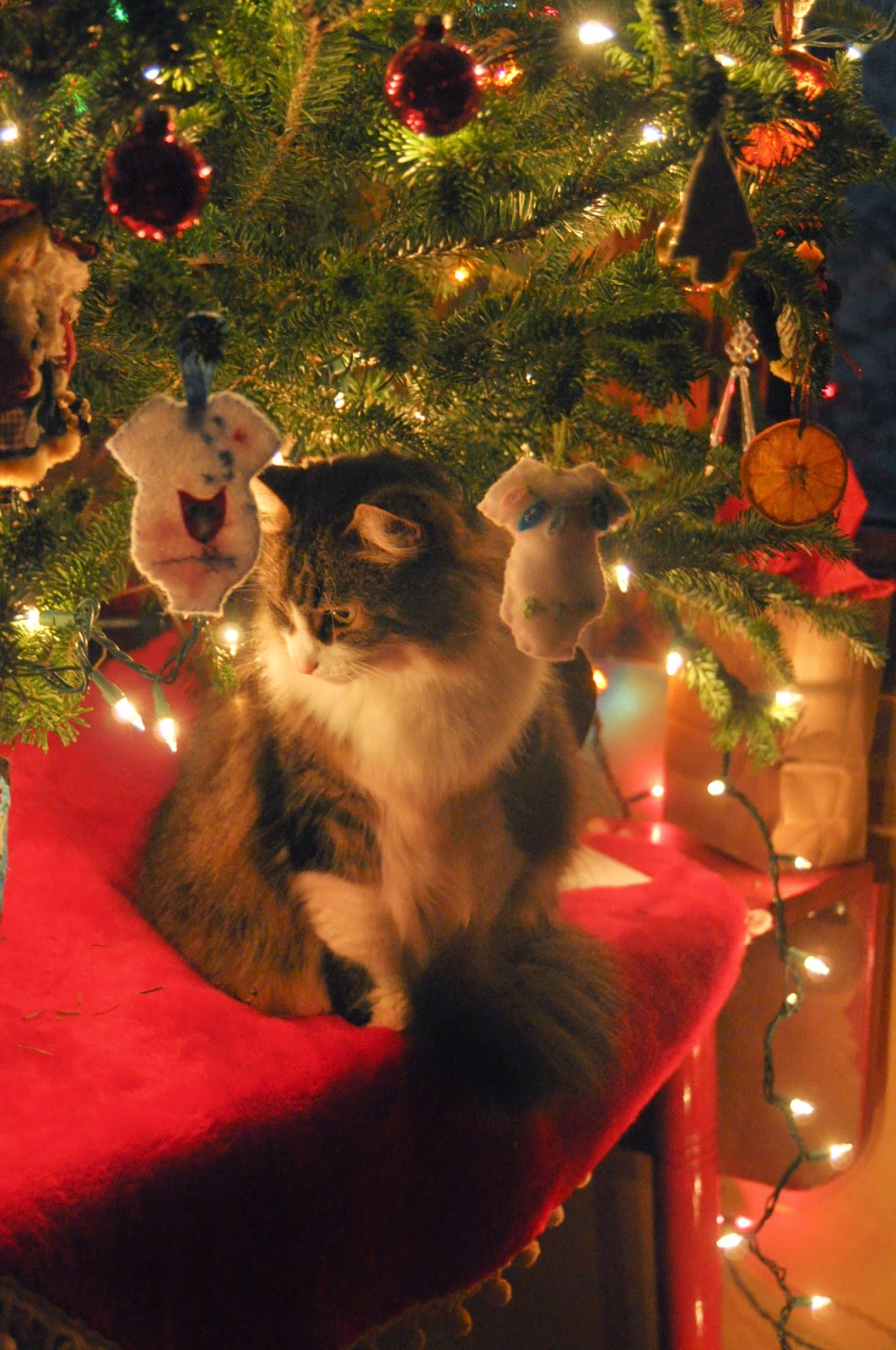 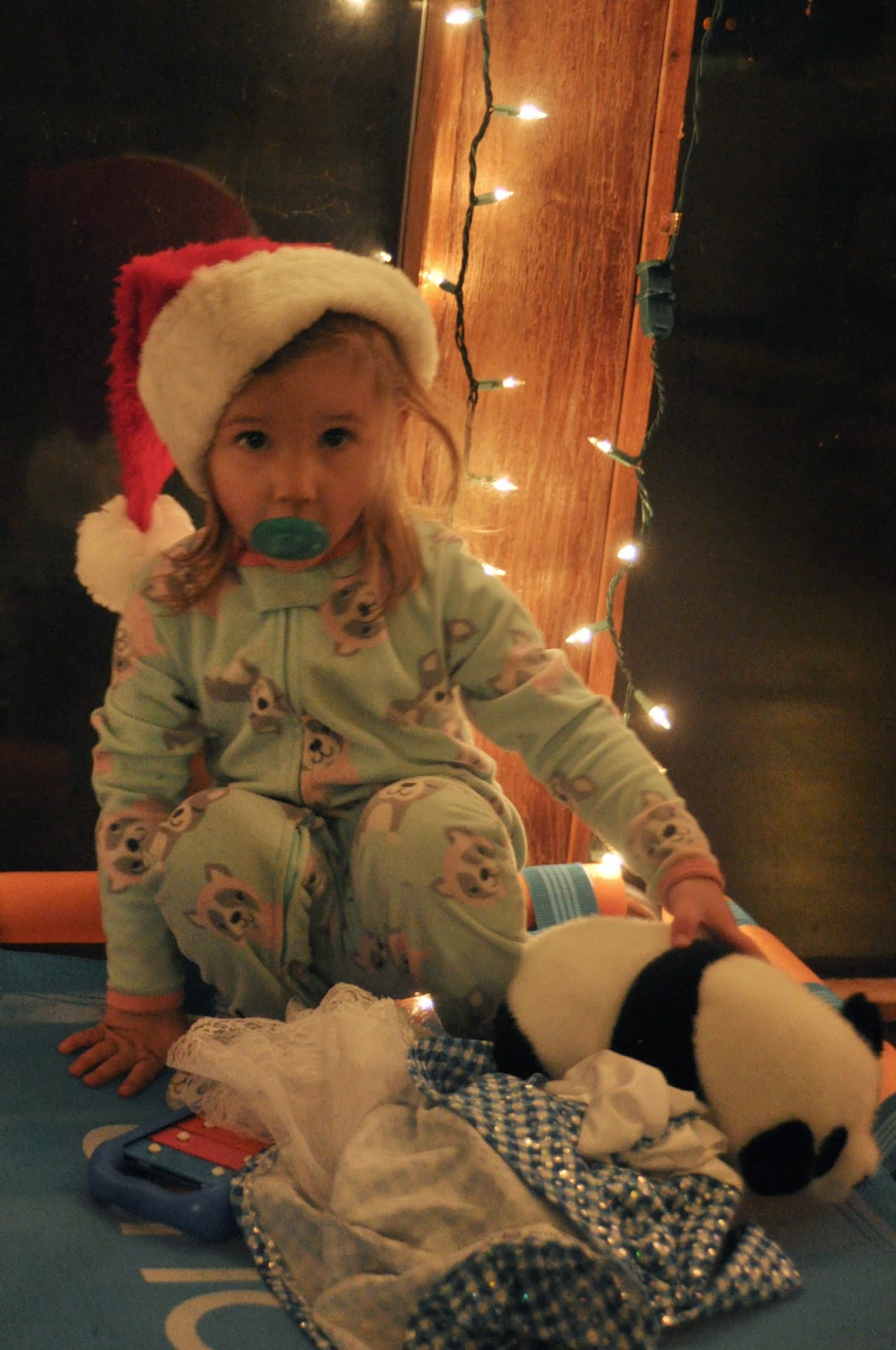