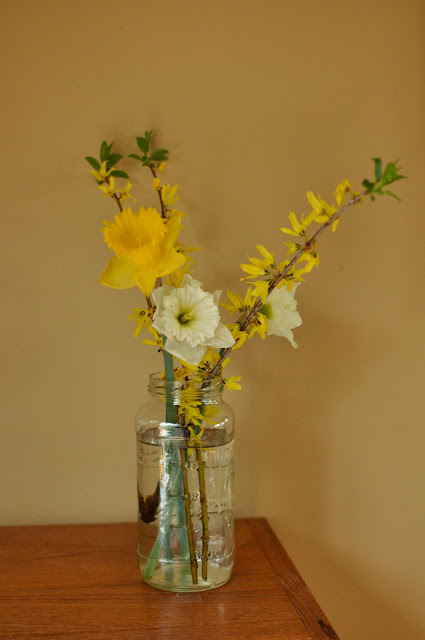 Life has been busy lately with quite a few big things going on. First of all We have been having major work on our house done. Since I originally started this blog as a way to keep track of our ongoing home improvements I thought I should mention that We finally took steps to fix one of the biggest issues with our home, that the foundation had a crack in it. We had concrete and foundation specialists come and level things as best they could and in the process we also had them deal with some issues we had with water leaking in the garage when it rains. They also put in some concrete piers and a steel support beam under the front of our house where our massive cantilevered windows were causing things to sag. The foundation isn't perfectly level even with the renovation and the crack is still visible but it is much better than it was and at least there should be no more movement and things are stable (and we have a warranty to back that up). The foundation issue was probably the number one reason our house was so inexpensive and we knew going in that we would have to do something with it eventually so it is nice having that checked off our list.

I don't have any pictures of all this because it's pretty uninteresting and not at all pretty so I am putting a picture of some pretty flowers from my garden instead, yay! The next (much more exciting) step is to hire a contractor to rebuild the front of the house where the huge windows are. The sagging has caused some of the window panes to crack and now that it is stable and supported we can replace the windows and redesign the front of the house. We are tossing around the idea of adding some sliding doors to that area so that we can open up the house more and combine our indoor and outdoor spaces in a better way but we'll see how it all shakes out once we have some more serious talks with a contractor.

Our other big news is that Eric has accepted a new job at a company called User Testing and will be starting with them in early April. As much as we loved his last place of employment he really feels that he is ready for a new challenge and is excited to be learning some new things and working in a new environment. He will be traveling for work for the first time and will start his training with a week in San Francisco! I am so excited for him but we will miss him terribly while he's away. It's a big life shake up and will be an adjustment for sure but it's also very exciting to be moving on to new things. 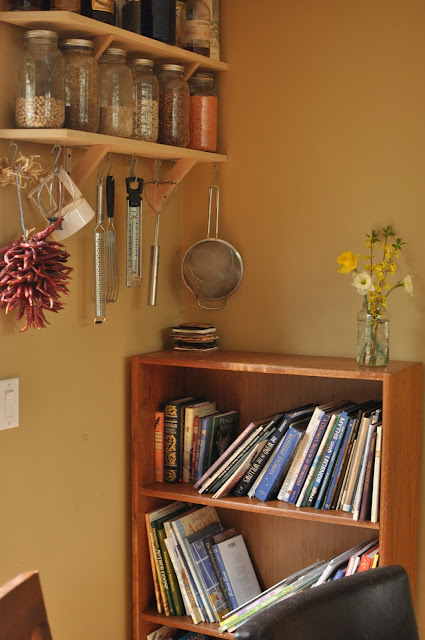 Life is speeding right along for me and the kids too. We are still loving Echo's preschool coop and are very active in our home school group. I am still teaching art club at my house once a month and am hoping to get back in to teaching even more in the near future. Unschooling the kids is so exciting and fun for me as well, they are growing and learning so much all the time. We recently went to a library book sale where we stocked up on tons of books, I got a whole rolling suitcase full for $15! Since I am also in a spring cleaning kind of mood I had Eric bring up an extra book case from the basement so we could expand and organize our book storage (that's what the book case photo is about). It's great to be able to actually find the books I'm looking for now even though the books are taking over our house, lol. I do think it's important as home shcoolers to have a great home library though so I am fine with it.

We have been doing lots of reading and playing outside and we have also been taking advantage of the great weather to do a lot of hiking in the area. It has been so fun to take the kids hiking now that they are getting older! I look forward to many years of exploring the trails in our area. 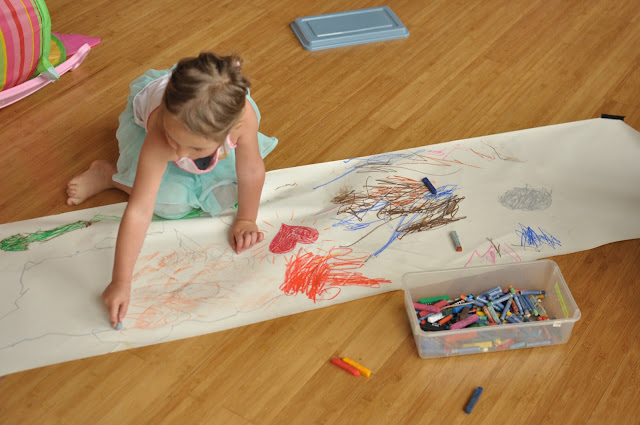 Both girls love art and Have really been in to oil pastels lately. The rich colors and the ease with which they go on the paper are really appealing to young kids I think. I have been rolling out big sheets of Ikea craft paper for them to work on and working large like that has really excited them and kick started their creativity. 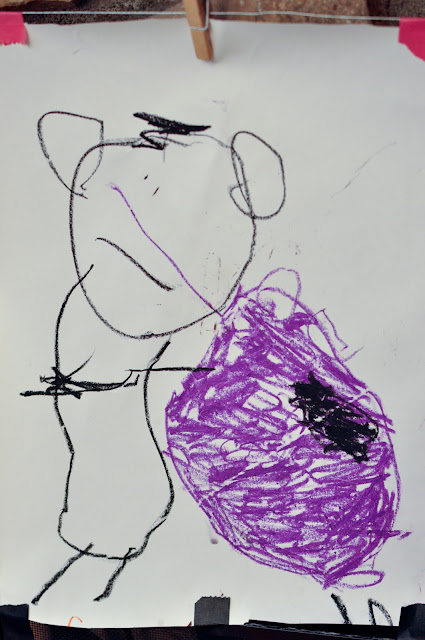 Echo has really been getting more representational in her art and has been drawing lots of people lately. above is a picture she drew today of a man with an apple that has a bad spot on it, fantastic!

That's what is is new with us in a nut shell. It's been an exciting year so far and such a nice one after having some hard times last year. It feels like we have turned a corner in our lives and it is all very exciting and fun to see where things will go.
Posted by Audreylaine510 at 9:49 PM No comments: 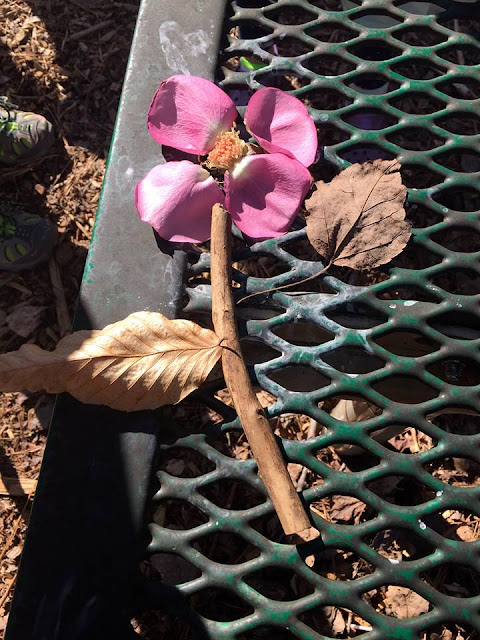 Echo has been making some pretty cool 3 dimensional "installation" art lately and I wanted to share a few quick pictures of her work. The top one she made at her preschool coop, she picked up all these separate pieces and put them together to make a whole flower complete with a stick stem and leaves. 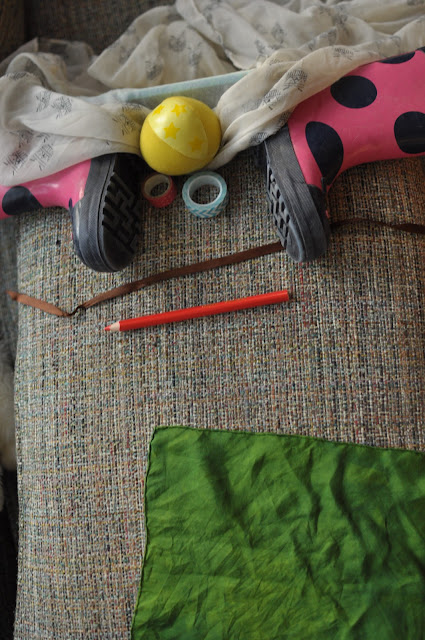 A few days later she put this fun face together with found objects on our couch. The rolls of tape are the eyes, the pencil and ribbon the mouth, the boots are the ears and the scarf and ball are the hair. Her creativity amazes me and is so lovely to see. 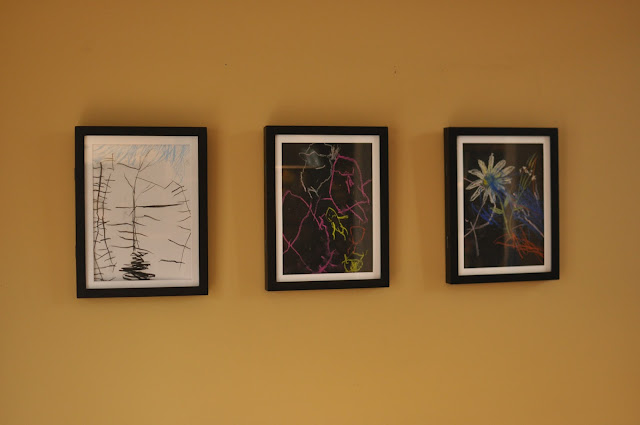 On an another art related note, we recently got these awesome art frames from Walmart. They open up on a hinge so that you can easily display swap out your child's artwork, Having the art in a frame with a matte really elevates it and the kids get so excited about having their work displayed in such a professional looking manner. I love how easy it is to change the artwork out too since my kids are constantly creating new work. I highly recommend these for anyone with kids who love making art. 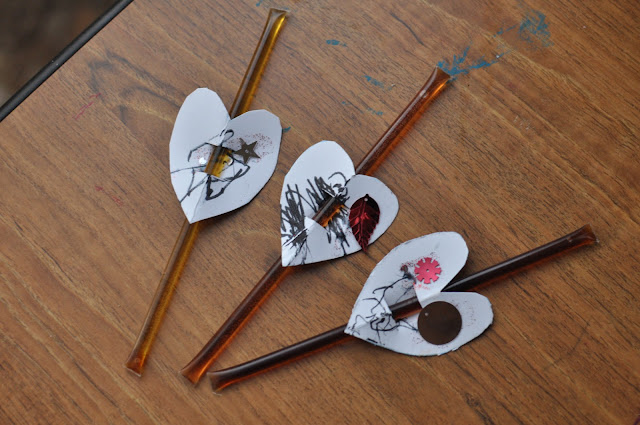 We have had so many huge things in the works that I am way behind on posting but wanted to quickly share the valentine's gifts Echo gave to her friends at our preschool coop. A lot of kids in our group have dietary restrictions including a lot of gluten free folks as well as some vegetarians and some that don't eat sugar. Echo and I came up with the idea of giving honey sticks for Valentine's day since it is a sweet treat that met everyone's needs. I cut out the heart shape and then had Echo decorate them. They turned out really cute and they were a big hit with everyone! Definitely a solid choice for a relatively healthy Valentine's day treat.
Posted by Audreylaine510 at 8:47 PM No comments: 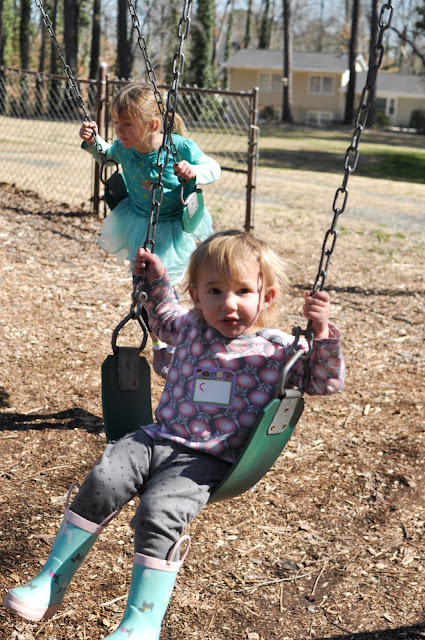 We had a fun month with open house at Echo's preschool coop, a visit from out of town friends and a Birthday party at a yurt at Red Top Mountain! Here are some of our photos from February. 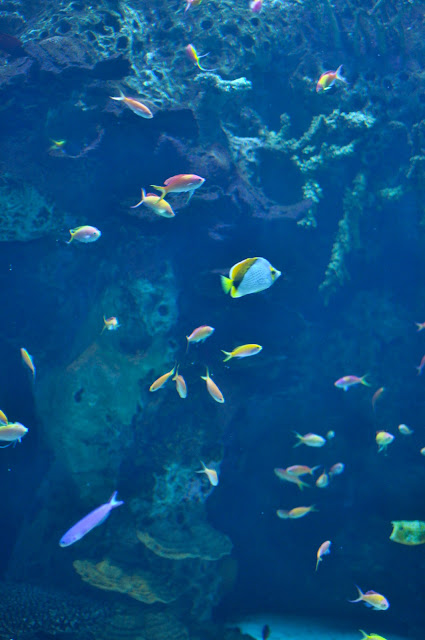 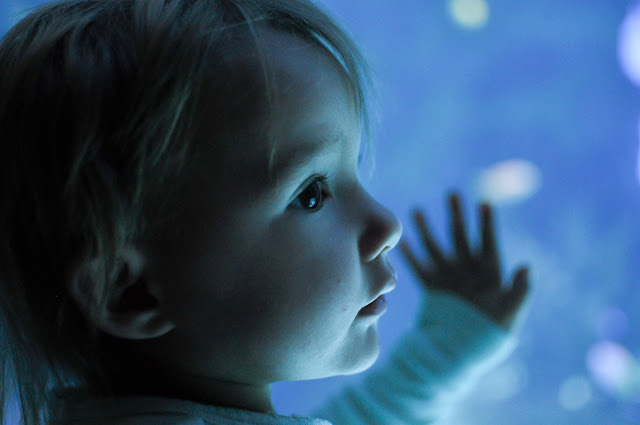 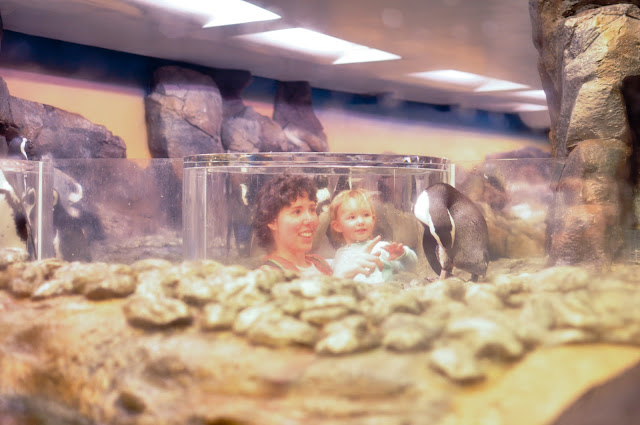 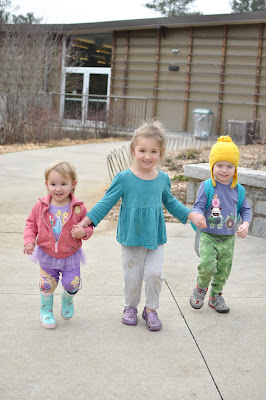 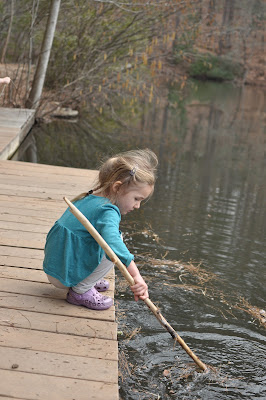 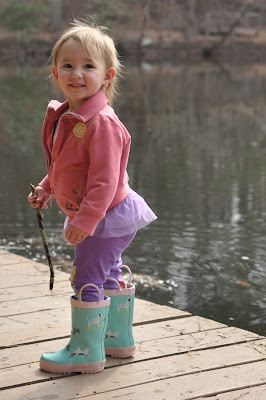 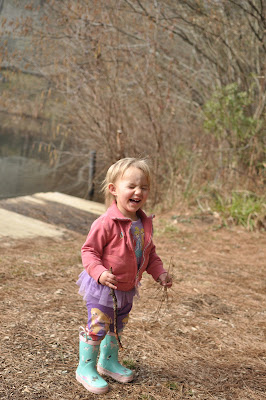 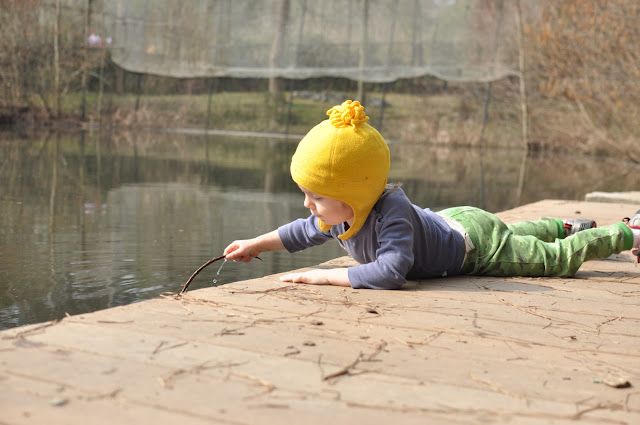 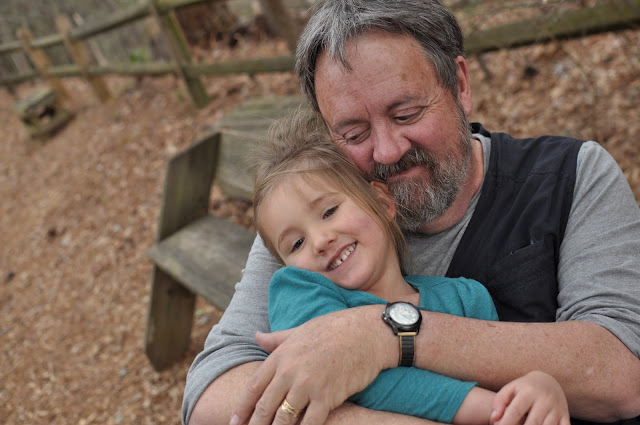 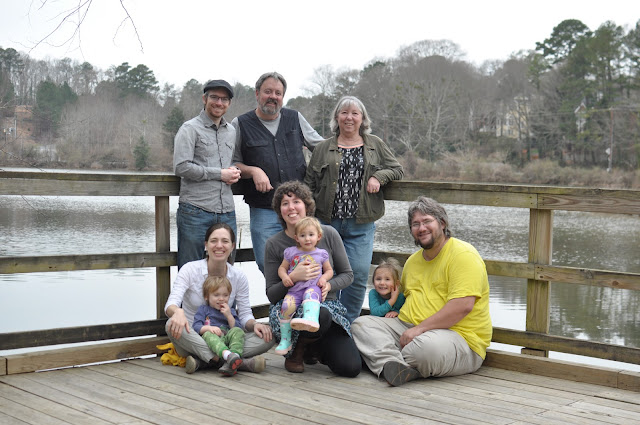 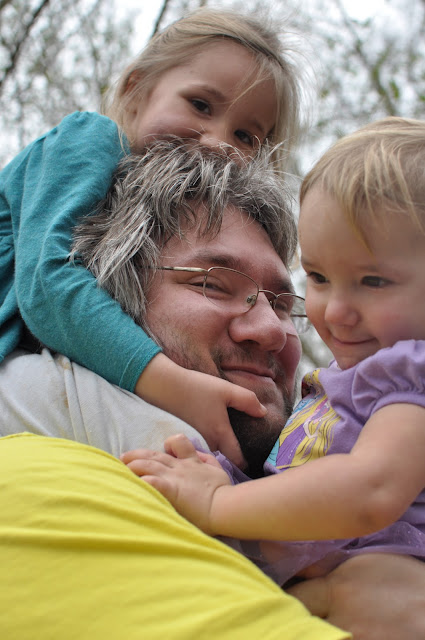 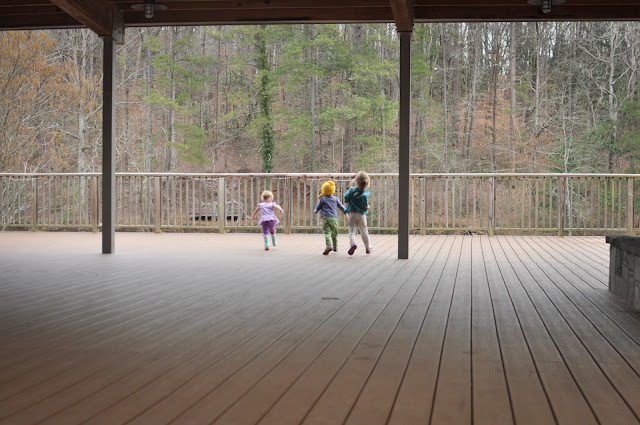 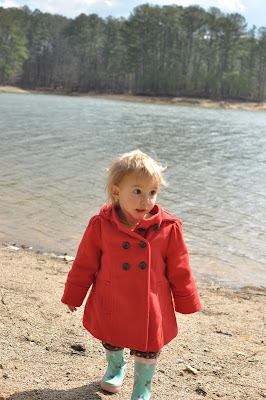 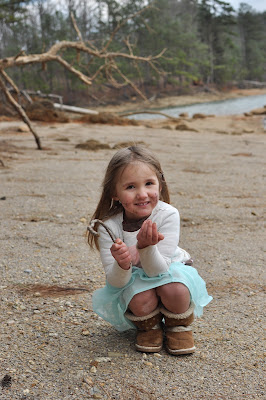 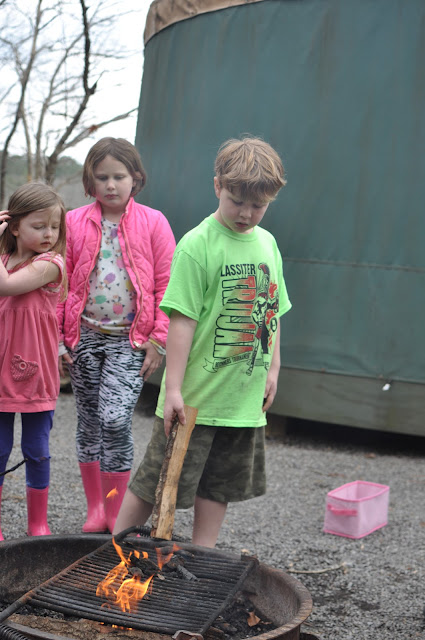 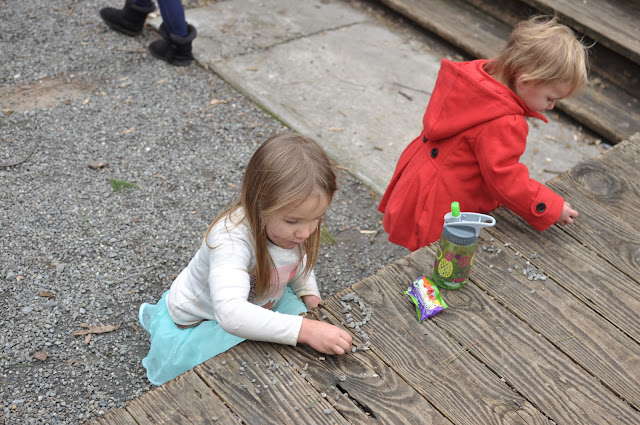