This Easter instead of doing the same old tired Ham with some kind of potato side dish, my family came up with the idea of doing and Indian food Easter! A little out there maybe but certainly delicious! For my contribution I made Paneer, and Indian cheese which is often used as the protein in vegetarian Indian dishes.

I had Paneer for the first time at an Indian restaurant in DC last December and was instantly in love. Once I found out how it is to make I knew I wanted to try it at the first opportunity. This was my first cheese making experiment and it turned out great! I will definitely be doing this again in the near future. Here is what you'll need.

A large stock pot or dutch oven
A wooden spoon
A gallon of whole milk
lemon juice, lime juice or vinegar (I used lemon juice and loved the subtle lemon flavor it added to the cheese)
A bit of salt
Cheese cloth or flour sack tea towels
A colander

Here is the process...

Bring milk to a boil in your dutch over or stock pot, stirring constantly to prevent scalding. Add salt to taste. Once the milk reaches boiling add your lemon juice until the solids start to separate. I just kept adding lemon juice until the solids had completely separated so I'm not really sure how much I added but I would estimate maybe 6 tablespoons. Once the solids have separated the whey will be greenish like in the picture.


Poor the mixture in to a colander in the sink that has been lined with a tea towel or several layers of cheese cloth (we did two batches and found that the tea towel gave us a firmer cheese in the end so we will be using that instead of cheese cloth in the future).


when the curds are cool enough to handle, pick up the corners of the tea towel and bundle the whole thing up, we tied the ends together with twine. Squeeze out as much liquid as you can by hand and then stack heavy things on top of the bundle to press the liquid out.

After about 40 minutes the cheese will be ready to eat. You can then cut it in to small cubes or crumble it depending on how you want to use it. We planed on frying ours so we cut it in to cubes.

You can then season the Paneer however you like, we used masala fish seasoning just because it's something we had on hand, you can look up all kinds of Paneer recipes online for ideas. 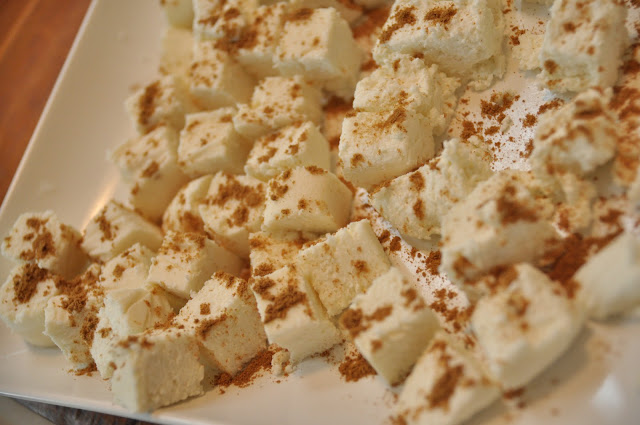 We served them as an apetizer for the main feast of chicken tikka masala and chicken vindaloo prepared by my parents and pictured below.

This was an incredibly easy and satisfying foray in to cheese making. I highly recommend it for the novice cheese maker, it's a great place to start!
Posted by Audreylaine510 at 10:35 AM